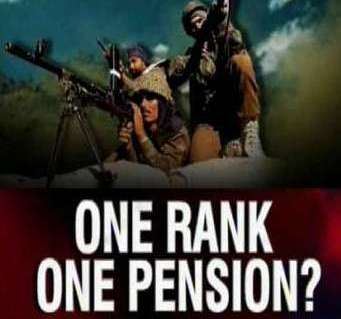 OROP Should be Implemented Without Delay

OROP Should be Implemented Without Delay

OROP was in force in India till 1973. That year, the government of Indira Gandhi surprisingly chose to terminate it following the Third Pay Commission. This was the prize the Armed Forces got for fighting valiantly and winning the 1971 war with Pakistan. It caused a lot of disquiet in the Armed Forces and veterans staged public protests. Several things demanded in OROP are in force even now. Every time a new Pay Commission recommendation is implemented, pensions rise as per half of the lower end of revised pay scale. Hence, future enhancements are being passed on.

But the problem escalated when the Sixth Pay Commission chose to club several ranks in a single pay scale. It did not consider the fact that defence forces have more ranks than civilian services and that they will suffer. It clubbed seven ranks into just two pay scales. This will work for the defence forces and has to be reversed. The defence forces should have pay grades based on ranks. Any future Pay Commission should have representation from retired senior Armed Forces personnel to decide pay revision as per restored grading by rank as civilians do not understand the importance of ranks in the Forces. Or better still; a separate Defence Pay Commission with appropriate staffing can be constituted.

Successive governments have themselves created a huge problem by choosing to ignore recommendations by several Pay Commission, other committees and best practices followed worldwide Ã¢â¬" that is of lateral absorption of retiring defence personnel in paramilitary, police forces or as defence civilians. Their training makes them eminently suitable for such jobs. Also, if they are so absorbed, the pension bill of the defence forces will also come down drastically.

Defence personnel suffer from two big problems: they retire early and apart from some niche categories, do not find civilian employment opportunities. Hence, to keep morale high, the government should immediately initiate measures to absorb retiring personnel into appropriate wings. It should take into consideration the special needs such personnel and implement OROP without further delay. It made a major mistake by allowing the Delhi police to manhandle veterans at Jantar Mantar on 14th August. To be fair, the veterans were also in the wrong to hold their protest just a day before Independence Day when they knew that the prime minister would address the nation form Red Fort. Also, they were suitably warned to postpone their show till 16th August. Maybe they wanted to put maximum pressure on the government before I-Day. But the fracas was avoidable and should not have been allowed to end in the manner it did.

The excuse that if OROP is implemented, there will be similar demands from paramilitary and civilian personnel does not hold much significance as service rules governing them are completely different. A civilian retiring at 60, or even later if he/she gets an extension, cannot compare himself with a defence personnel retiring at 40 or 50. After all, he is gainfully employed for many more years and retires at a much higher pay scale to avail a higher pension anyway. Civilian bureaucrats should not be allowed to deny Armed Forces personnel their special right that was arbitrarily taken away in 1973. Narendra Modi, after his promise at Rewari, has no excuse to keep postponing the issue.