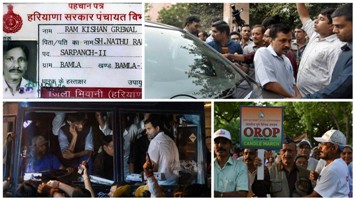 Editor-in-Chief of indiacommentary.com. Current Affairs analyst and political commentator. Writes for a number of publications. View all posts by this Author
An army veteran, fighting for correct pension as per OROP (according to various reports, he was getting Rs 3000 less per month than what was due to him) commits suicide and the Congress and the AAP turn the OROP suicide into a media circus. Of course the government is also to blame as it accorded legitimacy to the protests by arresting Rahul Gandhi (thrice in a space of two days) and Arvind Kejriwal. But perhaps the governments hand was forced as both the leaders were to visit a hospital where the ex-soldier was taken and that would have inconvenienced other patients and created a law and order problem at the medical facility. The Congress and the AAP just tried to gain political mileage out of an avoidable tragedy in which the government had no role.

But the government must speed up the delivery process of pensions under OROP if it wants to nip the growing discontent in the bud. As it is, enough time has passed since OROP was promised. Further, since the governments final decision on OROP was not accepted by several ex-servicemens bodies, it is all the more urgent that what the government promised much reach the beneficiaries soon, correctly and efficiently. Once they start receiving the enhanced pension in their hand much of the grievances will either vanish or be subdued. By letting procedural hassles, especially at the last mile banking chain, delay the delivery, the government is sowing the seeds of further discontent.

Also, the whole episode has once again shown that despite prime minster Narendra Modis repeated exhortation to his ministers not to speak out of turn, there are several conflicting voices emerging from the government and this queers the pitch further. It also serves as a stick for the opposition to beat the government with. V K Singh said that the dead ex-soldier was a Congress worker. What difference does it make? If he was fighting for his genuine dues and if he committed suicide, the least the government could have done was to have expressed regret and promise a thorough investigation in the matter. Allegations against the dead soldier were in extreme bad taste.