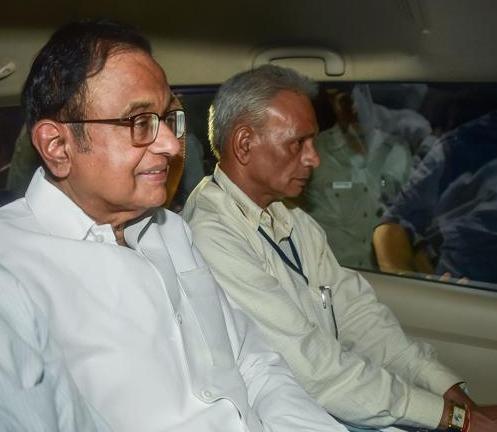 Finally, the CBI has caught up with P Chidambaram and has taken him to the agencyâs headquarters in Delhi for questioning. But not before much drama took place outside his house. As the CBI team reached his residence in the swank Jor Bagh locality of the capital, it found the main gate locked and no one to answer their call. A few officers climbed the walls of the compound and entered. Before that, PC had made a dramatic appearance at a press conference held at the AICC office after doing the vanishing act immediately after the Delhi High Court rejected his anticipatory bail plea a day ago. Latest reports say that the CBI has formally arrested him and will produce him in court tomorrow.

In the press conference, Chidambaram said many things about "respect" for law and asked the investigating agencies to respect the law of the nation. But did he do it himself? Not finding him at home, the CBI had pasted a notice on the gate of his house and asked him to appear before the agency within two hours. This fact was reported in the media. So, even if Chidambaram had not gone to his house in the interim (he said he was not absconding but burning the oil with his lawyers to file a petition in the Supreme Court today but the irony is that despite he himself being a top lawyer and having a battery of celebrated lawyers with him, he filed a defective petition in the Supreme Court which was rejected), if he was such a law-abiding citizen, he could have joined the probe as asked or could have called the CBI and requested for more time after hearing about the notice. But the "law-abiding" citizen in him did not think it fit to do either.

Instead, he vanished. And when he surfaced at the press conference, he said he will choose liberty over life and said that he is not an accused in the INX media case. He also said that the FIR does not accuse him of any wrongdoing. That is precisely the point. He is not an accused and if even the FIR does not name him for wrongdoing, then why is he afraid to appear before the ED & the CBI without anticipatory bail? Why does he think they will arrest him? Why is he creating hurdles in the probe by being non-cooperative? Obviously, he has insider information (do not for a moment think that being out of power reduces the clout of politicians because they have their moles in all departments and agencies from their long years in governance) that new evidence has surfaced that will link him to the INX media scam and that the evidence will be sufficient for the CBI to arrest him.

He is obviously also shaken by the remarks of the Delhi High Court which said that as per evidence produced, prima facie he appeared to be the kingpin of the INX money laundering case. This is quite evident in the manner the full battery of the top lawyers at the command of the Congress party was deployed just to get anticipatory bail for him in the Supreme Court. That they bungled is another matter. The idea was to put pressure on the judges but their inefficiency did not let them succeed. Chidambaram and the Congress party must submit before the due process of law and not make it a case of persecution. If Chidambaram has done no wrong, the courts will free him with his reputation intact. Being a lawyer, he must have faith in the judiciary. If not, he has to bear the consequences of his misdeeds.