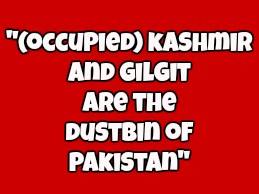 Five days ago, it was reported that the Pakistani army was creating quarantine facilities in Pakistan-occupied Kashmir (PoK) and Gilgit to keep Covid-19 patients from all over Pakistan, especially the Punjab province, there. It was reported that the army top brass was concerned that with the army headquarters and residences of all top commanders of the units located in Punjab province, any big outbreak of Covid-19 in that province would endanger their lives. Hence, they decided that the entire province would be kept free of confirmed coronavirus cases and there would be no quarantine facility for such patients in the province. Instead, it was decided that all such patients and even suspects would be transported in closed trucks to quarantine facilities in PoK and Gilgit.

Today, it was reported that the first trucks carrying 19 such patients have already started streaming into quarantine facilities in PoK and Gilgit despite protests by the local residents. The number is likely to swell in the coming days as new cases are reported. One trader in Muzaffarabad in PoK said that the army only thinks about Punjab and treats "Kashmir and Gilgit as the dustbin of Pakistan". But will that deter the Pakistani army? They know that PoK and Gilgit are the most underdeveloped regions of Pakistan. They know that the region lacks even basic medical facilities. Yet they are exposing it to the biggest health scare mankind has had to face in a long time. If community transmission were to happen in the region, it would be a disaster. But at least the generals would be safe in Rawalpindi and Islamabad.

India should protest this. When Article 370 was abrogated, Foreign Minister S Jaishanker had said that "PoK is part of India and we expect one day to have physical jurisdiction over it." If India considers PoK to be its territory illegally occupied by Pakistan, it should protest the way Pakistan is converting it into a quarantine centre for the Covid-19 patients from all over the country. Disregarding the medical advice that shifting or transporting coronavirus patients, unless absolutely necessary for medical reasons, is not to be done as it increases the chances of transmission and that people should be quarantined wherever they are located, Pakistan is playing the dirty trick of shifting them to the disputed territory.

If PoK and Gilgit had good medical facilities to treat such patients, Pakistan's action might have been supported. But by sending them to an area which is known for its poor infrastructure, Pakistan is acting like the Nazis and showing that it is treating Covid-19 patients as outcasts to be banished to concentration camps masquerading as quarantine facilities. It is not known if such patients would be treated there or left to die, as PoK and Gilgit do not have doctors needed to treat such patients and there is no report that Pakistan has sent doctors, nurses and paramedics along with the patients.