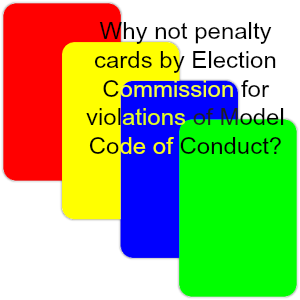 Editor-in-Chief of indiacommentary.com. Current Affairs analyst and political commentator. Writes for a number of publications. View all posts by this Author
The Election Commission (EC) is truly a toothless body when it comes to its powers to restrain or punish politicians making speeches that violate the Model Code of Conduct (MCC). The very first directive in the MCC elaborates on this aspect read the full MCC here. But the fact that the MCC is not legally enforceable and depends upon voluntary adherence by parties and candidates makes it worthless. Apart from censuring the offender, there is little the EC can do as per its present mandate. Due to this, the Indian political landscape is full of habitual offenders who time and again stir up public sentiments by making inflammatory remarks, secure in the knowledge that they will just get a rap on the knuckles. These remarks by such politicians have the potential of causing disharmony between communities and it can also lead to riots. Of course there are other criminal laws that can be used to book such offenders if things go out of hand, but since they are politicians fighting elections and the EC is mandated with all things connected to the conduct and supervision of elections, it must be empowered to deal with such instances in a way that acts as a deterrent.

The recent case of Sakshi Maharaj is a shining example of how politicians can get away by violating the MCC. Despite directly accusing the Muslim community of indulging in practices (4 marriages and 40 children, though not backed by facts) that were leading to a population explosion in India, he just escaped with a censure by the EC. This grossly undermines the position of the constitutional authority that the EC is. It also has no deterrent effect and encourages other politicians to violate the MCC with abandon. That is the main reason why public and political discourse in India is plumbing to newer depths each passing day. Hate speeches have become the norm. Making unsubstantiated corruption charges, like the one Rahul Gandhi made against Narendra Modi on the basis of the Sahara-Birla diaries though they were called worthless evidence by the Supreme Court, is also fast becoming the new normal. Some politicians are behaving like wild bulls (although the Hindi khula sand does more justice to what is being meant) and nothing is sacrosanct or improper public behavior for them. They act more like louts waiting for a street fight than enlightened peoples representative.

The present situation is like having a referee to conduct and supervise a sporting match without giving him the power to book players for playing rough or below the belt. It can lead to a free-for-all, greatly undermining the referees position. This is what is happening in Indian politics. There are no penalty cards in politics. There should be. The EC does not have the power to book those who hit below the belt. Sport generally has six different types of penalty cards to warn players that they are breaking the rules and are playing unethically. There are green, white, blue, yellow, red and black cards that are shown to book players who infringe the rules of the game. Each card carries a warning and/or a penalty depending upon the degree of infringement. A model code of conduct also exists in sports  sometimes unwritten. But it is backed by enforceable penalty. The same should be introduced in Indian politics. Till now, the EC has not been willing to take up the mantle as it will mire it in hundreds, maybe thousands, of court cases and stretch its already thin resources. But what one is suggesting is something that bypasses the court routine and penalizes the offenders purely through the electoral laws as enforced by the EC and backed by the constitution.

For instance, a first time offender can be issued a green card, warning him that he or she has transgressed the MCC. It can go up the stages and finally a red card can be issued when the offender has committed five such offences. The red card will automatically make him ineligible to stand for any elections, hold any public office, campaign for any candidate or be a member of any political party for the next five years. If a sitting representative makes repeat violations, in addition to all of the above, he must be made to resign his seat. The ECs decision in this regard must be final and binding and any appeal must be made with a separate constitutional Appellate Authority established for this purpose and not in a court of law. Unless a strong deterrent is provided for, elections in India will soon become a farce and the strongest candidate  the one who can break all the rules  will emerge winner at all times. But none of the political parties, dependent as they are upon money and muscle power to fight elections, will ever agree to have such a system in place for it will threaten the very existence of most of them.