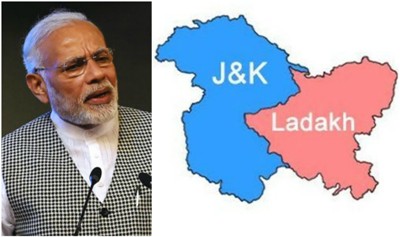 Prime Minister Narendra Modi did well to address the nation to explain why the government chose to read down the provisions of Article 370, what it means for the Kashmiris and the rest of the nation and what the government proposes to do from here on that will benefit the people of Jammu & Kashmir and Ladakh. It was a speech full of hope for the future which spelled out what the government will do to fully integrate J&K into mainstream India and how it will ensure that the people of J&K do not miss out on the opportunities that other citizens of the country get as the nation marches ahead.

The Prime Minister pointed out that the union territory status for J&K was temporary and it would still have its assembly, its MLAs and its chief minister. It would be granted full statehood again after things are normal, though he did not specify a deadline for that. He also stated that Ladakh's separation from J&K was permanent and irrevocable. He also highlighted that the Centre would now move to fill all vacancies to generate immediate jobs and more jobs will be created when both the public and private sectors set up units in the state. He promised better service conditions and salaries for civil servants and policemen. He also said that since the film industry was always ready to use the great locales of the state, he would ask Hindi, Telugu and Tamil film industry to set up units in the state that would provide employment to local people. He also assured the people of Kashmir that their children will have better educational opportunities and will be offered new scholarships.

The Prime Minister also talked about separatism and terrorism and urged the people to defeat the evil forces that were working to tear J&K apart. He also called upon the rest of India to help the government in bringing peace to the state. That was a veiled request to the unruly elements elsewhere not to target Kashmiris living outside the state. He ensured the people of the state that they will not suffer any problems in celebrating the Eid festival on Monday and said that all restrictions will be gradually removed to restore normalcy. He said that though he welcomed criticism of the government's move as differing voices will always be there in a democracy, he also expected that critics would respect the sentiments of the people and cooperate with the government in the "national interest".