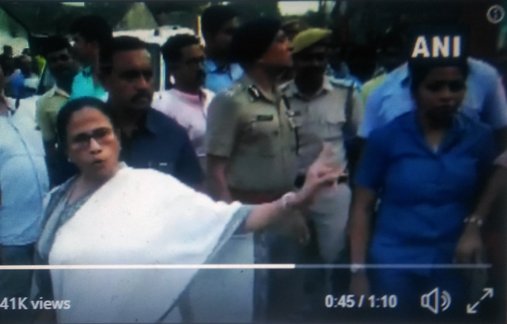 Mamata Banerjee Allows The BJP To Get Under Her Skin

Mamata Banerjee Allows The BJP To Get Under Her Skin

What is happening in West Bengal is regrettable and dangerous at the same time. It is regrettable because religion is being made the prime issue in the fight between two political rivals. The BJP has sensed that the time has come to consolidate Hindu votes in the state and so it has started using religious slogans to unite people. It is dangerous because the ruling party is trying to show that it a fight between those it terms outsiders and the locals, which it definitely is not. The TMC is under a false impression that it is only non-Bengalis who are voting for the BJP. The BJP has been successful in attracting support from the anti-TMC voters, mainly from the Left parties.

The main issue started during poll campaigning when chief minister Mamata Banerjee got down from her car and confronted a group who were shouting Jai Shree Ram. At that time, the group dispersed on seeing her. But after the results were announced and the BJP made massive inroads in Bengal, chants of Jai Shree Ram confronted didi wherever she went, especially in areas where the BJP had done well.

Hence, when she went to Bhatpara, the area from where local MLA Arjun Singh switched from TMC to BJP to fight the elections and won, beating Dinesh Trivedi, she faced a group chanting the mantra. She immediately got down from her car and started scolding them. But instead of running away, the group kept up the chant. A furious Mamata asked senior police officers accompanying her to take down the names of the protestors and arrest them. She alleged that they obstructed her vehicles and abused her. In the video of the incident, Mamata is heard saying that these outsiders who are allowed to stay in Bengal, work and eat here, are bringing alien culture and are creating disturbances in the state.

Mamata Banerjee is failing to understand that it is no longer limited to the so-called outsiders. More and more bhadralok Bengalis are voting for the BJP and this is reflected in the way the party has upped its vote share to about 40%, just 3 percent lesser than the TMC. Obviously, such a large vote share cannot come only from the so-called outsiders. Whether she likes it or not, the general feeling in the state is that her policies amount to minority appeasement and Amit Shahâs dream of consolidating the Hindu vote in the state may materialize faster than seemed plausible just a few months ago.

Mamata has said that she has nothing against people chanting Jai Shree Ram but she objects to it being used as a political slogan. But has not the BJP been using it ever since the construction of Ram Mandir at Ayodhya became a highlight of its political agenda? The BJP was not using it in Bengal as it had a negligible presence in the state. Now that it sees a space for itself, it will obviously use the same slogan it has been using successfully all over India for the last 20 years. The best way for Mamata Banerjee is to ignore the chants and fight the BJP on other fronts. When she shows her irritation at the chants, she trivializes the political importance of the issue, angers more Hindus than she admits and allows the BJP to get under her skin.