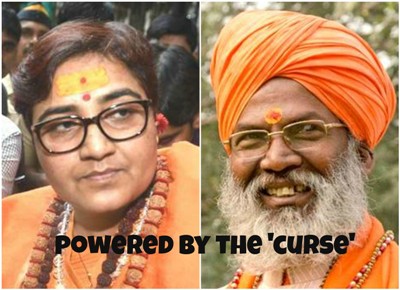 Pragya Thakur, Sakshi Maharaj And The Power Of The Curse

Pragya Thakur, Sakshi Maharaj And The Power Of The Curse

Editor-in-Chief of indiacommentary.com. Current Affairs analyst and political commentator. Writes for a number of publications. View all posts by this Author
Pragya Thakur, an accused in the Malegaon blasts case who is out on bail and the BJP candidate from Bhopal, has said that the chief of the Maharashtra Anti-Terror Squad (ATS), Hemant Karkare, tortured her in jail and was killed in the 26/11 operations as she- a sadhvi - had cursed him. After a nation-wide outrage over her disgusting (and if one might add, anti-national, for Karkare was just doing his duty) comments, Pragya took back her words, apologized and said that Karkare was a martyr who was killed by enemy bullets. But the damage was done.

Hemant Karkare was a brave police officer who was even-handed and did not see any difference between terrorists based on their religion. For him, it was the duty to nab and bring to justice those who conspired to weaken the nation. We cannot be privy to what kind of torture, in any, he inflicted on Pragya Thakur but it is quite possible that he was following the standard operating procedure to elicit information from her about the conspiracy that led to the Malegaon blasts. If it seemed torture to her, she could have approached the National Human Rights Commission of India or the National Commission for Women or the courts through her lawyer to get relief. But raising the issue now and that too in this manner doesnt befit her self-styled image of a sadhvi.

What is with this word curse of which we are hearing so much of late? Before Pragya disclosed the power of her curse, Sakshi Maharaj, the BJP candidate from Unnao (he is the sitting MP from the constituency) also warned voters that he will curse" them if they did not vote for him. He said that I am a saint. It is written in the Shashtras that if a sanyasi asks for something and is not provided with, then he takes away all the good deeds and gives sins in return. So should devout Hindus shake with fear lest the likes of Pragya and Sakshi Maharaj curse them to damnation?

In Homers Odyssey, the character Penelope says it is not the power of the curse  it is the power you give the curse. Every day, millions of people curse others. None of these curses work because they are uttered with a selfish motive. Religions across the world recognize the power of the curse, but the spoiler is that it must be made by a man or a woman who is pure like snow and does not have a selfish motive behind cursing. How many of those who are now claiming to have either cursed someone to death or threatening to take away all your good deeds and give you sins in return can testify to being so pure? They neither have the power to curse nor can they give power to the curse.

It is sad that these so-called holy men and women are debasing Hinduism for personal gains. It was once asked of a renowned astrologer that if he could see the future and offer correctional remedies (wearing this or that stone, set in various metals) to people that would bring them eternal peace and overflowing wealth, why couldnt he improve his own station in life with one or more similar stones. Without batting an eyelid, the astrologer replied that all his powers would vanish if he used them for personal gain. While that would have been a marketing strategy by the astrologer, there is truth in the reply. Even if you are a believer, next time a holy man or woman threatens to curse you, just remind her or him that it is written in the Shashtras that if the power of the curse is used for personal gain by a holy person, all their powers will vanish.