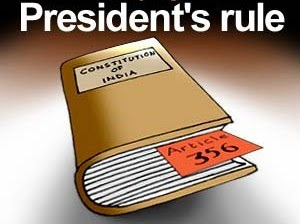 Editor-in-Chief of indiacommentary.com. Current Affairs analyst and political commentator. Writes for a number of publications. View all posts by this Author
Was the single bench of high court justified in ordering a floor test vis-a-vis the imposition of Presidentâs rule in Uttarakhand? Noted constitutional expert Soli Sorabjee is of the opinion it was not. Sorabjee says that âit is incomprehensible how a floor test can be ordered when a presidential proclamation is in force and the assembly is in suspended animation.â Attorney General Mukul Rohatgi used the same words before a division bench of the high court to obtain a stay against the floor test.

That is the crux of the matter. While the Supreme Court has held that imposition of Presidentâs rule is subject to judicial review, it is the actual imposition that can be challenged and the courts can decide if there actually was a failure of constitutional machinery in the state. The floor test can happen once the imposition is set aside. It is strange that the judge ordered a floor test without first ruling that the said imposition was bad in law. That is the legal position.

Politically, the Congress high command first erred in Arunachal and repeated the mistake in Uttarakhand. When a sizeable number of state MLAâs keep raising issues, a party like the Congress, which strictly follows the high command structure denying democracy to its state units, should step in to quell rebellion. Time and again, rebels from Congress ruled states complain that they do not get access to Rahul or Sonia. This state of affairs forces them to go against high command nominated CMâs.

The Congress has a long history of state leaders rebelling against rootless CMâs imposed by the high command in order to protect the âdynasty.â State leaders were often accommodated at the Centre or given plum party posts. But since it is no longer ruling in Delhi, that luxury is not available any more. There will be more rebellions and the Congress has to come up with solutions fast. With governments in states ruled by it reduced to a minority, blaming the BJP every time for engineering defections will not do. It has to set its own house in order.