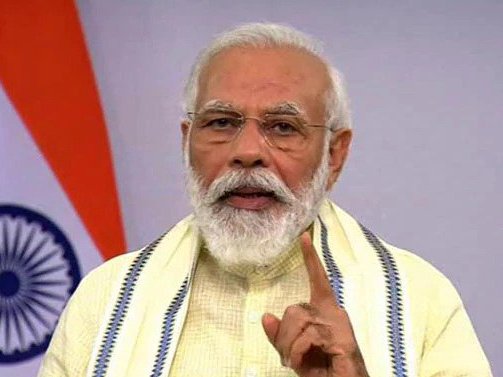 Prime Minister Modi addressed the nation on the last day of June today as Unlock 2.0 kicks in from tomorrow. The Centre had earlier announced relaxation in several things while keeping schools, colleges, gyms, swimming pools, the Metro and suburban trains closed until 31st July. Modi bemoaned the fact that some people were being negligent in following the rules still in place - like wearing masks or face covers, washing hands frequently and maintaining social distance. He warned the countrymen that such negligence will make India lose the battle against coronavirus and those caught will be dealt with strictly. He also reminded the people that with the onset of the monsoons, the country will witness a spurt in the seasonal diseases that appear during this period and the countryâs health infrastructure will be under severe stress and hence people have to be very careful.

In the operative part of his address, PM Modi announced that the benefits under the PM Garib Kalyan Anna Yojana (PMGKAY) will be extended until the end of November. He said that more than 80 crore people will continue receiving free wheat or rice and chana. He said the prime concern of the government was to ensure that the cooking oven was lighted each day in every home in India and no one went hungry. He also stressed on the need to implement the One Nation, One Ration card scheme at the earliest as it will benefit millions of migrant workers and praised the states that were doing exemplary work for its early implementation.

While it is good that the PMGKAY has been extended as it will be of immense benefit to poor families suffering from the triple blow of the pandemic, loss of livelihood and return of working members of the family from other states, the Prime Minister also needed to elaborate on what the government was doing to ensure that those who did not wish to migrate now will get work near their homes. He also needed to assure the country that the economy would not enter into a recessionary phase and the steps his government was taking to prevent that.

But one thing is sure. A large number of people in India still believe in Modi and are ready to follow his advice. Hence it was important that the Prime Minister spoke to the nation and asked the countrymen to follow the rules in place despite the unlocking. Now that he has done it, we can expect people to be less negligent.