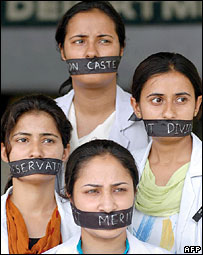 Private Sector Should Not Be Forced to Hire OBC's

Private Sector Should Not Be Forced to Hire OBC's

Editor-in-Chief of indiacommentary.com. Current Affairs analyst and political commentator. Writes for a number of publications. View all posts by this Author
The National Commission for Backward Classes (NCBC) has once again called for OBC quotas in private sector jobs. This demand, made off and on and supported by political parties with vested interest in vote bank politics, has the potential of derailing the efficiency of the private sector by burdening them with incapable people.

The private sector employs people on non-discriminatory basis and promotes meritocracy. The principle of employing the best person for the job regardless of caste, creed or religion means that inefficiency is minimized. Searching for, employing and retaining staff is a very costly and time consuming process. Companies and HR agencies scout campuses and the job market to pick suitable talent at competitive remuneration. If this process is skewed to include reservation for backward classes, it will be a recipe for disaster.

There is a need to reexamine the whole policy of affirmative action. We need to free quotas from the clutches of the crony capitalistic cartel that corners all benefits for itself and its cronies. Instead of improving the lot of the downtrodden in general, quotas have just managed to bring up less than 1 percent among them to a level where that pampered 1 percent acts as their spokesmen. This includes politicians, bureaucrats and businessmen from the backward classes. Hence, instead of reducing inequalities, quotas have just managed to increase inequality among backward classes.

Help and handholding is required but not in the way it is being done now and definitely not by extending quotas to the private sector. We have to make the backward classes capable, not dependant. We have to bring them up to a level where they can compete with others independently of their caste or social background. For this, out of the box thinking is required. Policy makers should put their heads together to decide how affirmative action is to be remodeled to be widely effective.