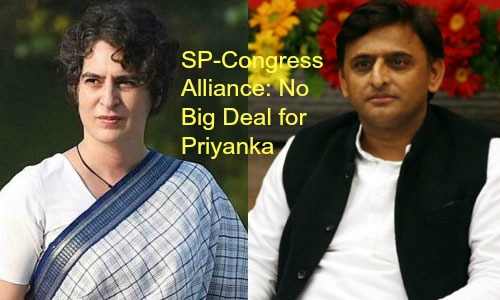 Priyanka Gandhi: Nothing to Exult About

Priyanka Gandhi: Nothing to Exult About

Editor-in-Chief of indiacommentary.com. Current Affairs analyst and political commentator. Writes for a number of publications. View all posts by this Author
The Congress is exulting that Priyanka Gandhi has at last showed her political acumen by salvaging the deal with Samajwadi Party (SP) after it was on the verge of being cancelled. But is there really anything to feel jubilant about? Getting 6 seats more than the final offer of 99 by the SP initially was a lot less than the Congress initial demand for 138 seats and even less than the scaled down demand of 110 seats. Further, the SP did not yield much on seats in Rae Bareilly and Amethi, traditional Congress strongholds. Hence, to most observers, it seemed that despite Priyankas intervention, the Congress got a bad deal.

However, this is in keeping with the state of the Congress party in UP. It had won only 28 seats in the 2012 assembly elections and only 2 seats in the 2014 Lok Sabha elections. Hence, despite its status as a national party, it does not have much presence or support in the state. Nothing has changed in its favour since 2014. In fact, things have gone against the party and despite Rahul Gandhis barbs against Modi, people treat Congress and its scion with disdain.

The Samajwadi party has entered the alliance to avoid four cornered contests, concentrate on winnable seats and preserve resources. Given the troubles within the SP, it is a good strategy for the party to concentrate on seats where it can consider winning a probability. With Akhilesh having come out tops in the family feud, he can now dictate terms, both within the party and to alliance partners.

That the Congress-SP alliance is one of convenience is clear from the fact that Akhilesh Yadav is not much enamoured of Rahul Gandhi. This was proved when Akhilesh made a jibe at the Congress scions in Rae Bareilly after the alliance was sealed. The CM told a rally that such is the state of education in the district that students do not attend classes and the few he found in one school mistook him for Rahul Gandhi when he asked them whether they knew him. It was a put down by Akhilesh who wanted to show that the district was being neglected by Rahul.

As for Priyanka Gandhi, neither did she achieve any remarkable success in negotiating the alliance nor is she expected to reverse the fortunes of the Congress party in the elections. In fact, with Priyanka in the fray, the opposition will have a field day in attacking her for the alleged illegal land deals of her husband Robert Vadra. She will be cornered on that and will have little time to highlight what plans the party has for developing UP. The way the Congress is projecting her seems that a huge public-supported leader has arrived to redeem the party. Priyanka Gandhi Vadra is anything but that. Politics is not her true calling and the partys attempt to thrust a reluctant Priyanka on the UP stage is going to fall flat.