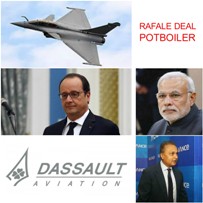 Editor-in-Chief of indiacommentary.com. Current Affairs analyst and political commentator. Writes for a number of publications. View all posts by this Author
Whom do we believe - the ex-French President, Francois Hollande, or Dassault Aviation? Referring to Anil Ambanis companys selection as offsets partner in the Rafale deal, Hollande has been quoted by French website Mediapart as having said that We didnt have a say on the subject. It was the Indian government which had proposed this service group and Dassault which negotiated with Ambani. We did not have the choice. We took the interlocutor who was given to us. Thats why, in other circumstances, this group could not be avoided in spite of everything.

On the other hand, the Dassault Aviation group has issued a media statement that says that:

1. This contract is a government-to-government agreement. It provides for a separate contract in which Dassault Aviation commits to make compensation investments (offsets) in India worth 50% of the value of the purchase.

2. This offsets contract is delivered in compliance with the Defence Procurement Procedure (DPP) 2016 regulations. In this framework, and in accordance with the policy of Make in India, Dassault Aviation has decided to make a partnership with India's Reliance Group. This is Dassault Aviation's choice, as CEO Eric Trappier had explained in an interview published in MINT newspaper on April 17, 2018. This partnership has led to the creation of the Dassault Reliance Aerospace Ltd (DRAL) joint-venture in February 2017. Dassault Aviation and Reliance have built a plant in Nagpur for manufacturing parts for Falcon and Rafale aircraft. The Nagpur site was chosen because of the availability of land with direct access to an airport runway, an essential condition of aeronautic activities.

3. Other partnerships have been signed with other companies such as BTSL, DEFSYS, Kinetic, Mahindra, Maini, SAMTEL. Other negotiations are ongoing with a hundred-odd other potential partners.

Before forming an opinion, it should be clear that Hollande was not speaking on the Rafale deal. He was trying to deflect questions directed at him over the financing of a film of his partner, actress Julie Gayet, by a Reliance group company. In order to defend himself of charges of favouritism or quid pro quo, Hollande sought to convey that the investment in the film was not a result of Reliance getting selected as Dassaults partner. In that sense, his statement can be considered to be prejudiced.

Further, the Dassault group is not owned by the government of France. Hence, the government cannot force it to accept anyone as the offsets partner. It is a hard-nosed business group working in highly technical areas that need lots of investment and a solid partner. It will obviously select its partners will due diligence and care, for after all, the offsets partner will make parts that will go into the making of the Rafale jets to be supplied to India. Dassault will not want to compromise on the quality of the jets just because the Indian government suggests Ambanis name. As its media statement discloses, it has already signed partnerships with half a dozen other companies and is talking to 100 others. Were all names suggested by the government of India?

Of course Ambanis company is not experienced. But with Dassault keeping an eye and Ambani capable of investing as per requirement, a best in class facility is expected to come up at Nagpur. Dassault would not have invested in the company otherwise. The main thing to find out is that if the jets are being supplied to India at an inflated price. For, that will surely prove that there are kickbacks and they are being shared all around. But if the fighter jets are what the air force needs and they are being made available at the right price, we should leave it to Dassault to choose its partners and provide us with the best machines.