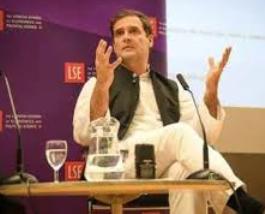 Editor-in-Chief of indiacommentary.com. Current Affairs analyst and political commentator. Writes for a number of publications. View all posts by this Author
Is Rahul Gandhi trying to divert attention from massive scams under UPA II, arguably the most corrupt regime ever to rule India, by saying that the Congress lost the 2014 elections due to a clash of the generations within the party? In his recent European tour, Gandhi said that the next generation versus old guard clash resulted in disarray in the organization and it led to the defeat of the party.

More specifically, he said there are senior leaders with experience and understanding and there are youngsters who are developing. You cant break the past because theres a lot of value in some of the senior people. So, the present has to be a merger of the future and the past, and thats really why Congress ran into trouble in 2014 because we found that there was an internal fight taking place between the older generation and the younger one.

This, actually, is old hat. Ever since the late Indira Gandhi assumed the reins of the party, this old guard versus new generation talk has plagued the Congress. The power tussle between K Kamaraj and Indira Gandhi has been well documented. The same goes for her differences with Morarji Desai. In fact, the old guard led by Kamaraj had engineered a split in the party in 1969 before Indira consolidated her position.

Rajiv Gandhi twisted the words to call the old guard power brokers and in his famous speech at the Centenary Session of the Congress in 1985, promising to rid the party of them. He used high sounding words like feudal oligarchy and self-perpetuating cliques to describe them but nothing came out of it. Later, however, Rajiv Gandhi expelled Pranab Mukherjee and several other leaders when he found dissidence was growing in the party.

If there was any old guard versus next generation fight in the Congress in 2014 on a scale that led to its defeat then it must be the best kept secret of India. Small disagreements on seat allocation and the resultant disgruntlement are things that are present in all political parties in India and the Congress must also have faced the same in 2014. But it lost the election that year due to the public perception that it was a party with a brilliant prime minister who was not being allowed to do anything against corrupt leaders and crony capitalists who were being protected by the high command.

When it comes to the Congress party, all talk about old guard and new generation in essence boils down to who is loyal to the Gandhi family and who is not. Hence, Rahul Gandhi should have said that in 2014, there were many Congressmen who were not loyal to him as they doubted his capability in running the party and the country with his corrupt cohorts. He should have added that the high command considers people Congressmen only if they profess undying loyalty to the Family.