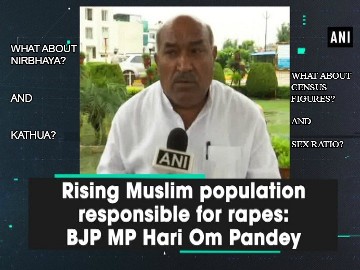 Raising The Muslim Bogey Will Not help The BJP, Stop This Nonsense

Raising The Muslim Bogey Will Not help The BJP, Stop This Nonsense

Editor-in-Chief of indiacommentary.com. Current Affairs analyst and political commentator. Writes for a number of publications. View all posts by this Author
Hari Om Pandey, the BJP MP from Ambedkar Nagar in UP has said that murders, rapes and terrorism are rising in India because of the rising Muslim population. He has touted the oft repeated falsehoods that Muslims marry 4 times and have many children whom they are not able to properly educate and hence they take to the life of crime.

Although Hindutva votaries and BJP leaders often cite multiple marriages and too many children by Muslims to raise fears in the Hindu community about getting swamped by them in the near future, no data supports their views. If their claim that Muslims have too many children was true, Census figures would have shown a dramatic increase in the Muslim population. But this is not happening. Muslim population grew by 29.3% between 1991 and 2001 and by only 24.4% between 2001 and 2011, a fall of 5%. As education spreads among the Muslims, they will have lesser children so that they can bring them up better. Once growth stabilizes, Muslims will at best form 21% of the Indian population.

The second claim that Muslims marry many times is not true because the sex ratio in India shows that there are simply not enough girls for Muslim men to keep 3 or 4 wives. According to the 2011 Census, there are just 940 females per 1000 males in India. So where are the Muslims getting their 4 wives from? If one Muslim man was to keep 4 wives at a time, more than three other Muslims would have to remain bachelors, for they will not get girls to marry.

As for the charge of Muslims contributing to the rising crime graph, one just needs to look at the two most controversial rape cases to disprove the theory. None of the accused in the Nirbhaya rape case that shook the nations collective conscience was a Muslim. Yet they raped and brutalized a young woman like devils. Then, recently, none of the persons who kidnapped, confined and sexually molested a minor in Kathua were Muslim.

Criminals exist in all communities. If the community is backward socio-economically, maybe the percentage of criminals belonging to it will be higher than the national average. But that does not mean that the crime graph of the nation is rising because of them. Instead of castigating the Muslims and propounding fancy, unsupported and outdated theories, the BJP MP and his government must work for uplifting the Muslims by providing opportunities for education and work as per the sabka saath, sabka vikas promise of the Prime Minister.

pic adapted from a screen grab from ANI report