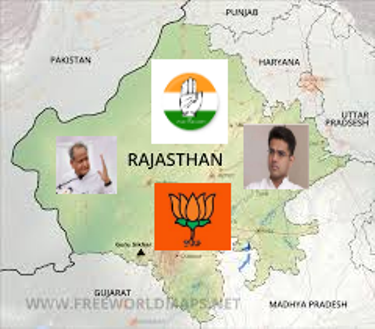 Rajasthan: The Gloves Are Off

Rajasthan: The Gloves Are Off

The political battle in Rajasthan is getting dirtier. Both camps are taking a conciliatory stand in public but are doing things that send the signal that neither of them is interested in conciliation. Yesterday, when Sachin Pilot reiterated that he was not going to join the BJP and that people were spreading canards to put him down before the Gandhis, Congress hit back by asking him to stop enjoying the BJP's hospitality and return to Jaipur with the MLAs. Elsewhere, Ashok Gehlot tried to make fun of Pilot's privileged upbringing by saying that "good English and good looks" do not necessarily make a good politician.

In the interim, it was reported that Pilot had a conversation over the phone with Priyanka Vadra and even Rahul Gandhi tried to contact him but without success. Nothing much seems to have come out of the discussion with Priyanka. In none of the overtures the Congress made to Pilot was it made clear that he will get an upper hand in his fight with Gehlot, or at least a homecoming with dignity. It was also reportedly made clear to him that there was no question of changing the chief minister. When Pilot found that his main grievance was not being addressed, he rebuffed all such overtures by the party.

Later, the Rajasthan assembly speaker issued disqualification notices to all the rebels, including Pilot. The Pilot camp immediately challenged the same in the Rajasthan High Court (the matter will be heard by a division bench tomorrow after a revised petition is filed by the Pilot camp). Here too, the Congress was quick to see BJP's hand as the Pilot camp was being represented by Mukul Rohatgi and Harish Salve. Both of them have held important constitutional and legal advisory posts in the NDA government and are perceived to be close to the BJP.

The Congress is also saying that more rooms are being booked in the resort at Manesar and that the Pilot camp is trying to get more party MLAs to join them. It is saying that Pilot is not interested in any kind of settlement. Who would be if one's bete noire in the party has been given a carte blanche to aim poisoned arrows at one's body? Ashok Gehlot has accused Pilot of "himself doing the deal" and indulging in horse-trading. It the Congress was serious in getting Pilot back to the fold, it would have reined in Gehlot. But by allowing Gehlot to target Pilot incessantly, it has sent the signal that Gehlot has the full support of the party. To Pilot, whose main fight is with Gehlot, it is as good as the party telling him to get lost.