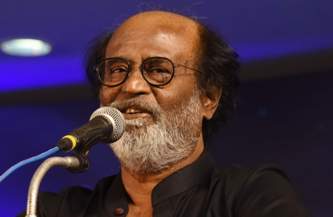 Editor-in-Chief of indiacommentary.com. Current Affairs analyst and political commentator. View all posts by this Author
After months of teasers, Tamil superstar Rajnikanth finally announced his decision to enter politics. As with all other celebrities who take the plunge, Rajnikanth also declared that the system needed a cleaning up and it was time that someone did it so he was accepting the challenge. Like others, he too added that he was not entering the fray for any position or post but to serve the people and to build a new Tamil Nadu. Given the aura surrounding him, Rajnikanth might just be the person who can cleanse the sytem. But again, the system is known to have broken many with a resolve stronger than him.

Given his immense popularity  with numerous fan clubs and even temples  Rajnikanth starts on a strong footing. As Tamil Nadu is used to personality-based politics, he can hope to galvanize this fan base into party cadres. One says hope to because politics in India is a tricky issue, based on complicated mathematics of religion, caste, creed and community. Although Rajni has promised his party will be free of religious and casteist bias, it remains to be seen how people accept it. For, a fan who admires his art and screen persona might not accept his other credentials.

Further, one man parties are autocratic and full of chamchas. These lower rung leaders neither have grassroots following nor the authority to take independent decisions. In such a scenario, it will be very difficult for Rajni to build a viable unit in a hurry. Of course there will be some defections from other parties. But that will not be enough to run a state like Tamil Nadu. Despite his honest intentions, Rajni will first have to build an organization that can fight and win an election against the well-entrenched AIADMK and the re-galvanized DMK and then run the government and it cannot be done just on the basis of the huge fan following. If he is not able to find the right people, he will lose all the goodwill he has generated through years of hard work.