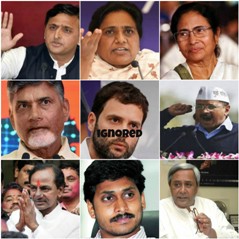 Editor-in-Chief of indiacommentary.com. Current Affairs analyst and political commentator. Writes for a number of publications. View all posts by this Author
The chinks in the opposition armour are being exposed one by one despite the bonhomie displayed by top leaders. It now appears that this camaraderie is also limited to leaders who have no truck with each other as they operate from their own areas of influence. Hence, Mamata Banerjee and Arvind Kejriwal will travel to Vishakhapatnam to laud Chandrababu Naidu but Rahul Gandhi will come to Bengal and blast didi and his party will not ally with Kejriwal to beat the BJP in Delhi. The opposition leaders are so bent on protecting their own hallowed turfs that they have confined themselves to being local and have lost the national perspective.

They have started thinking that if each one of them can stop the BJP in their respective states and come up winning a respectable number of seats; they can unite and form the next government. But they forget that in this scheme of things, they are derisively dismissing the largest all-India party, the Congress. Just because the Congress got under 50 seats in 2014 (tantalizingly close to what regional parties like AIADMK and TMC got) doesnt mean that it can be ignored. Punjab, Gujarat, Goa, Rajasthan, Madhya Pradesh and Chhattisgarh bear testimony to the fact that in large parts of the country, the only party that can take away votes from the BJP, it is still the Congress.

The Congress has been nearly wiped out in Bengal, first by TMC and now by the BJP, has lost the peoples confidence in Andhra Pradesh as they hold it responsible for the bifurcation of the state and is no longer in the picture in UP and Bihar. But it still has influence in many states and can be expected to win many more seats than what it got in 2014. Hence, by ignoring the Congress, the regional parties have effectively buried opposition unity. This is especially disheartening as at least three opposition parties  the BJD in Odisha, the YSR Congress in Andhra and the TRS in Telangana  are not on the same page with most others.

The reason for the dismissal of the Congress by the major regional parties is not far to seek. Ever since Rahul Gandhi 2.0 came into being, the Congress developed a false sense of superiority and started projecting him as the future prime minister of the country. That was anathema to several opposition leaders who fancy their chances for a shot at the hot seat in the event of a loss for the NDA or even a hung parliament. Hence, they were shy of naming a leader of the pack. But Congress wants Rahul, period. So all talks of unity vanished and the opposition is now each one for itself.

If the so-called third front that wants to fight the BJP without the Congress is taken together, minus, of course, the BJD, the TRS and the YSR Congress, they cannot expect to get more than 100 seats at best and 60 at worst. Their only hope is to play kingmakers in the event of a hung parliament. But if these parties had included the Congress in their scheme of things, together they could have hoped for nearly 220 seats at best and 150 at worst. Then they could have appealed to the BJD, the TRS and the YSR Congress to support them and could have formed the next government. But as things stand now, even their best show, along with the best show of the UPA and the support of the uncommitted parties will not be enough to topple the NDA. Divided, it seems, the opposition will fall.