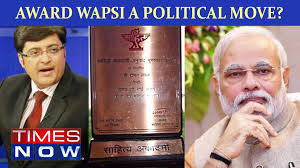 Editor-in-Chief of indiacommentary.com. Current Affairs analyst and political commentator. Writes for a number of publications. View all posts by this Author
Award wapsi is witnessing a reverse swing Pakistani bowlers would be proud of. A report in The Times of India says that there has been a twist to the much publicized movement by eminent writers, academics and other artistes some time back. It now transpires that most of them who had returned the awards have either agreed, or are in the process of agreeing, to take them back. So what was the drama of returning the awards about?

Some of the writers are reported to have said that since there is a change in the situation in the country from the one it that was prevailing when they returned the awards, they will now take them back. This is a logical point, but the problem is that the awards were returned without the proviso that they will be taken back once the situation improves.

I have always maintained that award wapsi was an ill-advised move. A writerâs or an artisteâs strength is his pen or his work. Those who felt that the country was being torn apart by intolerant and divisive forces should have used their pens or work to protest and educate the people about the inherent dangers of the situation as they perceived it.

Awards should not have been returned for two reasons. Firstly, they were not given by the government but represented a collective appreciation of their work by the people of India. By returning them, they insulted the people. Lastly, there was no provision of returning them.

The whole episode was a ploy to generate publicity and embarrass the government of the day. Next time, if people feel strongly about an issue and think of returning their awards, they would be well advised to burn the certificates and donate the amount to charity. That way, some deprived people will benefit and awards and honours will not become ping-pong balls.