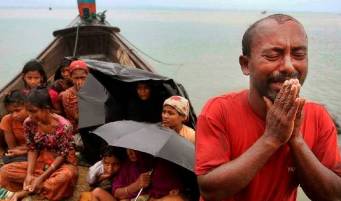 Rohingyas: Let Us Not Be Cold-Hearted

Rohingyas: Let Us Not Be Cold-Hearted

Editor-in-Chief of indiacommentary.com. Current Affairs analyst and political commentator. Writes for a number of publications. View all posts by this Author
Every nation has the right to choose who it will allow to enter its country, whether for tourism, business, diplomacy, sports or even as refugees. But there has to be a consistency and clarity in the stand of the nation. Of course, this requirement does not apply when the entrants are illegal refugees and it does not matter if they are fleeing from religious persecution in their home country. India, or for that matter any other country, is not bound to regularize or go soft on such illegal immigrants. Hence, purely on this premise, India is right in deciding to detect and deport Rohingya Muslim refugees from Myanmar, who have entered the country illegally.

But when this stand is juxtaposed with the open arms policy adopted towards Hindu, Sikh, Jain, Buddhist and Tamil refugees from other neighbouring countries like Pakistan, Bangladesh, Sri Lanka or Tibet (China), then it smacks of discrimination based purely on the religion of the refugees. A small minority of Rohingyas are Hindus. Will India admit them if they flee and deport the Muslims? It does not befit a secular nation like India to adopt a discriminatory policy towards refugees of one particular religion. Of course, apologists for this policy can always argue that Muslim refugees have many other countries to go to, while for Hindus, Jains, Sikhs, Buddhists and Tamils India is the home country. But this argument does not hold water in the face of the original plea on which the refugees are admitted  that of religious persecution. If the other refugees are admitted because they are persecuted in their home country, the Rohingyas should also be allowed.

Further, it is wrong to paint the entire lot of such refugees as radicals. It is true that they form a huge body of people who can be radicalized by the IS or other groups in Pakistan and Bangladesh. But can be is a relative term. If they are admitted and rehabilitated properly, they might not be radicalized and live a better life in India. In any case, the focus should be on policing the known areas of entry and making it known at border posts that any human smuggler caught bringing Rohingyas will be severely dealt with. It is a regular feature of Indian policing that we let a problem fester and assume gigantic proportions. The solution then thought of always creates controversies. Why was nothing done when it was known that the Rohingyas were being persecuted in Myanmar, were fleeing en masse and were entering India through north-eastern states and even Bangladesh?

Of course other countries like Thailand have already deported Rohingyas. But India should use its good offices with the government of Myanmar to ensure that the persecution of the Rohingyas must end. It should emphasize that the situation of them entering India is not acceptable. Policing and diplomacy will end the Rohingya influx. Detection of these refugees is a must  after all India must know how many of them have entered and where they have located in the country. But deportation must be restricted to known trouble makers or those who have committed other crimes in India. Genuinely persecuted refugees, especially those with families, should be allowed a chance to make India their home.