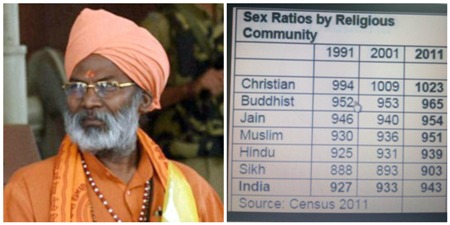 Editor-in-Chief of indiacommentary.com. Current Affairs analyst and political commentator. Writes for a number of publications. View all posts by this Author
Sakshi Maharaj is back to spewing venom on Muslims through unsubstantiated charges. His comments that 4 wives, 40 children and three divorces is causing population explosion in the Muslim community is in extreme bad taste, highly inflammatory and not backed by facts  from the Census data and other studies. Although the BJP has distanced himself from his comments, there should be another way to punish the lawmaker for his frequent outbursts.

First of all, if Sakshi Maharaj does not know, there is something called the sex ratio in population figures. The all-India male-female ratio stands at 1000:943 as per the 2011 Census. The ratio for Muslims is 1000:951. So, if there are only 951 females for every 1000 males in the Muslim community, how can every male marry four times? There simply are not so many women for all Muslim men to have four wives.Also, if one Muslim male marries four times, three others are going to remain unmarried as there would be no brides for them.

Secondly, let us take the increase in number of Muslims. Between the 2001 and 2011 Censuses, the Muslim population rose marginally, from being 13.4% of the population to being 14.2%. It is another matter that the Hindu population declined marginally during the same period, from 80.5% to 79.8 percent. In absolute terms, Hindus added 13.9 crore to the population while Muslims accounted for 3.4 crore. This does not support the charge that Muslim couples are giving birth to 40 children.

Lastly, what is it about three divorces? How can a divorce, even one divorce, have any bearing on the number of children one raises? Sakshi Maharaj just has to say something against the Muslims to prove his staunch Hindu credentials and this should not be tolerated any more. If one is a Hindu sanyasi, instead of poking ones nose like an uneducated buffoon without knowing facts into another communitys affairs, one should concentrate on using the knowledge one has gleaned from the study of the Hindu granths (if one has gleaned any, that is) and try and rid the Hindu society of the various ills that are plaguing it.

Sakshi Maharaj is doing a great disservice to the nation by spreading rumours. The BJP should ask him not to make baseless and unsubstantiated charges against the Muslim community. If a nation where 80 percent of the population is Hindu still has fears of being swamped by Muslims, there is something seriously wrong with opinion makers in the Hindu community. The best way forward for all Indians is to study facts and not be swayed by such inflammatory comments from the supposed protectors of the Hindu faith.