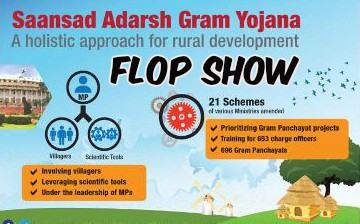 Sansad Adarsh Gram Yojana: No Model Village To Show Even After 6 Years

Sansad Adarsh Gram Yojana: No Model Village To Show Even After 6 Years

The rural development ministry commissioned a review-cum-audit of all rural schemes. Called the Common Review Mission-2019, the audit has painted a not so rosy picture of Prime Minister Modi's pet scheme, the Sansad Adarsh Gram Yojana (SAGY), or the scheme for each MP to adopt a village in his constituency and develop it as a model village. On paper, it was an excellent initiative as it would have taken the MP to the grassroots and would have brought her or him closer to the people. It would have given birth to model villages that could have been replicated throughout the constituency. It would have also improved infrastructure, created jobs, brought prosperity to the villagers and given a huge boost to local self-government. By understanding and addressing the problems of one village, the lawmaker could have understood the problems of most of his rural constituents.

But alas, nothing of that sort has happened in the six years that the scheme has been in operation. The committee categorically stated that "the CRM teams that visited the states did not find any significant impact of this scheme. In many of the SAGY villages, MPs did not give any significant money from MPLADS. In isolated cases, where MPs have been proactive, some infrastructure development has taken place, but the scheme has not made any perceptible impact". It went on to make a damning assessment to say that "as such, these villages cannot be called model villages. The CRM is of the opinion that in the current format, the scheme is not achieving the desired purpose. It is recommended that the ministry may review the scheme for enhancing its impact."

The report of the committee points out that the major flaw was the reluctance of the MPs to allocate money from their MPLAD funds. Who goes to a village to see what work is being done? Why satisfy a handful of voters? If the MPLAD fund is used to construct, say, a bus shelter in a city or town with huge signages proclaiming so, it might influence a good number of voters. The reluctance to fund for developing a model village shows the priorities of our lawmakers. The second flaw, which the committee did not point out, is due to the caste, religious and other calculations. No MP would be able to select a single village that would not leave him open to charges of either favoritism or discrimination. They would thus be reluctant to wholeheartedly support such a scheme.

The scheme either needs to be redesigned or scrapped. If it is redesigned then either separate funds need to be allocated for it or it must be made mandatory for MPs to spend a specified percentage of MPLAD funds for the scheme. For, in the absence of dedicated funding, the scheme is not going to take off. Also, it must be made mandatory for the MP to spend a given number of days every year in the village. Finally, the selection of the village must be made through computer software and randomly to prevent the MP from suffering any backlash. If these and other prickly things that are discovered cannot be done, then it would be better to give the scheme a quiet burial.