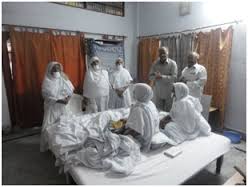 Editor-in-Chief of indiacommentary.com. Current Affairs analyst and political commentator. Writes for a number of publications. View all posts by this Author
Before writing this piece, a confession is in order. I am not a Jain. But many of my neighbours are. Just last year, the 76 year old mother of one of my neighbour committed santhara. There was a constant stream of visitors Ã¢â¬" relatives and Jain strangers both Ã¢â¬" who came to their house everyday to pay their respects for the twenty odd days it took for her to attain Ã¢â¬Åsalvation.Ã¢â¬Â Some Jain munis also paid visits. I gathered that it was a huge occasion for them as one of them was trying to be one with God, the best way to attain moksha.

What exactly is santhara and how it came about to be practiced? Is it mandated by the Jain religion? Of the two Jain sects, Shwetambars refer to death by renouncing food and water as santhara and Digambars refer to it as sallekhana. When a Jain is terminally ill with no hope of revival or when he or she feels that the end is near, he or she renounces food and water to await death. The act is purely voluntary. Jains believe that the 24th tirthankar, Mahavira, had allowed santhara as an act of purification and a test of spirituality. It was initially practiced by Jain munis, but later on common people also expressed the desire to be one with God and families allowed them. The practice is being followed for centuries. But the legal problem is that no evidence exists of it being mandated by the Jain religion.

But it has to be recognized that most Indian laws as they exist today were drafted by the British. They had little knowledge of Indian religious customs and also did not have the urge or patience to give a thought to incorporating them when drafting these laws. Hence, choosing your own method or time to die was a foreign concept for them and they did not account for it when drafting laws relating to suicide. Indian courts are no different, having followed the British model and jurisprudence at all times due to its affinity with the laws in India. Rajasthan High CourtÃ¢â¬â ¢s recent order banning santhara has to be viewed in this context.

The court took a strictly legal view Ã¢â¬" that santhara was akin to suicide and was punishable under section 309 of IPC. The family members are punishable under section 306 of IPC for abetting suicide. As long as the two sections are on the statute books, how can a court take a different view? Suicide was decriminalized in India in 1994 when a two member Supreme Court bench held that section 309 was unconstitutional in the case P Rathinam vs Union of India and Anr. as it was violative of Article 21 of the constitution. But a Constitution bench of the apex court reversed this in the case Gian Kaur vs State of Punjab in 1996. In December 2014, the Union government decided to efface section 309 from the IPC as the Law Commission recommended it and 18 states and 4 Union territories backed the move. But 8 months have passed and like all government decisions, this one too remains on paper.

The big difference between suicide and euthanasia on the one hand and santhara on the other is that while death in the former is sought to be achieved swiftly, even instantly, in the latter it is not so. The legal opinion does not seem to discriminate between the two precisely because it does not account for religious beliefs and traditional practices. The Supreme Court had even said in the case Khurshid Alam Khan vs The State of UP & ors recently that Ã¢â¬Åwhat is permitted or not prohibited by a religion does not become a religious practice or a positive tenet of a religion. A practice does not acquire the sanction of religion simply because it is permitted. It further said that such a practice followed by any community or group of people, Ã¢â¬Åcan be regulated or prohibited by legislation in the interest of public order, morality and health or by any law providing for social welfare and reform.Ã¢â¬Â

With this kind of strict legal thinking, santhara is destined not to be decriminalized. The Supreme Court is unlikely to take a view different from the Rajasthan HC as and when the case comes before it. It is only when the government will repeal section 309 from the IPC that santhara, as also suicide; abetment to suicide and euthanasia, will all be decriminalized. The lesson to be drawn from this episode is simple. The Modi government has been talking about repealing useless laws. That is fine and some initiative has already been taken in this regard. But an effort should also be made in two opposite directions. Going back, some laws need to incorporate positive or negative sections, as per need, to make them relevant to religious and social customs prevalent in India. This was one deficiency that the British did not address. Going forward, other laws should have similar sections inserted to make them relevant to changed social mores and advances in technology, among other reasons. India has changed since its major civil and criminal laws were drafted. The change has to reflect in its laws.