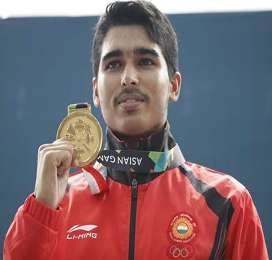 Editor-in-Chief of indiacommentary.com. Current Affairs analyst and political commentator. Writes for a number of publications. View all posts by this Author
A gold medal in any multi-nation tournament is an achievement in itself. But when it comes from a 16-year old lad who has just advanced to the senior stage, it is something to be immensely proud of. Saurabh Choudharys gold at the Asian Games is an extraordinary feat. He has beaten all odds consistently ever since taking up the shooting just three years ago. It needs to be remembered that first of all he is from a civilian background, second he comes from a small village called Kalina in Meerut district of UP and lastly, he is from a middle-class background. Yet, when he found he was not interested in studies his parents supported him and he proved himself regularly, first in India and then by winning the under-16 title at the Junior World Cup in Suhl, Germany in June this year.

That event had made the world sit up and take notice of the rising star. But the senior stage is a different cup of tea. In the field in the Asian Games were former world champion Tomoyuki Matsuda of Japan and Jin Jongoh of South Korea, the gold medallist at the London Olympics. That Saurabh held his own against them speaks volumes for his maturity and expertise in the sport. He also demonstrated rare qualities often absent in Indian sportspersons  steely determination and lack of nerves. He was not flustered after being behind against Matsuda in the final clash. He picked himself up and shot above-10 scores in his last few attempts to overtake the former world champion and hand him a defeat, signaling the birth of a new shooting star.

Talented sportspersons like Choudhary must be nurtured and supported. If he is capable of beating seniors much experienced than him at this young age, he has the capacity to go after world record scores in future. Thankfully, many not-for-profit organizations have started working in the sports field and talent like Choudhary will have the opportunity to progress further without exclusively depending on government support or dealing with indifferent official machinery. These are exciting times for Indian sports when talent is emerging in various fields and from small towns and villages. If we can spot them and nurture them, we can hope to give tough competition to the assembly line players from China.