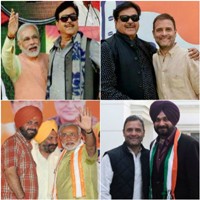 Shatrughan And Sidhu: Then And Now

Shatrughan And Sidhu: Then And Now

Editor-in-Chief of indiacommentary.com. Current Affairs analyst and political commentator. Writes for a number of publications. View all posts by this Author
So Shatrughan Sinha has joined the Congress at last. With his gift of gab, it will be very easy for him to junk the legacy of Atal Behari Vajpayee and L K Advani and embrace that of Jawaharlal Nehru and Indira Gandhi. Another celebrity turncoat  Navjot Singh Sidhu  has done it before him in the recent past. Both Sinha and Sidhu are blessed with a silver tongue which is often acerbic too. But both are also very egotistic men and are very easily displeased.

Take the example of Sidhu. He is at loggerheads with the party for many reasons. The first of his grievances is that he has not been included in the partys list of star campaigners in Chhattisgarh. During the assembly elections in the state, he had boasted that the Congress had won there because of his campaigning. Then, he nurses a grievance for not being invited to speak at a recent rally attended by Rahul Gandhi at Moga in Punjab. Finally, he is miffed that his wife was not chosen to be the partys candidate for Chandigarh. They claim to have been reduced to a powerless couple by the party. Sindhu even skipped work and went incommunicado for 20 days to make his displeasure known.

Sinha, on the other hand, has managed to get nominated from Patna Sahib, his old seat, on a Congress ticket. In fact, there was a fight between the Congress and the RJD over who had first right on the Bihars son of the soil. But obviously, Sinha, with his supposed national outlook, did not want himself to be tied up with a mere regional party. Hence, he joined the Congress. But these are early days and the Congress will lay the red carpet for someone who has made it his mission to be the chief critic of Modi and Shah. Once the initial euphoria is over, Sinha will find himself in the same boat as Sidhu. No dedicated party leader, who has been serving the party for decades, would like his position to be usurped by a turncoat, however celebrated he might be. There is bound to be resistance to Sinha as there has been to Sidhu in Punjab.

In case of Sidhu, it was found that he recycled all his old speeches to praise Sonia and Rahul Gandhi and the Congress once he joined the party. In a video that did the rounds, he was shown using the same words verbatim to praise the Gandhis that he had used to praise Modi in the past. There is a limit to the shairies one can recite in praise of anyone. Sinha will also fall in the same trap. People know that these celebrities are transient politicians and they pick parties that can boost their egos by keeping them in the limelight. Once they are not offered any posts, these celebrities quickly lose interest, first in the party and later even in politics. Hence, they are heard and applauded but often not taken seriously, neither by the seasoned politicians around them nor by the voters.