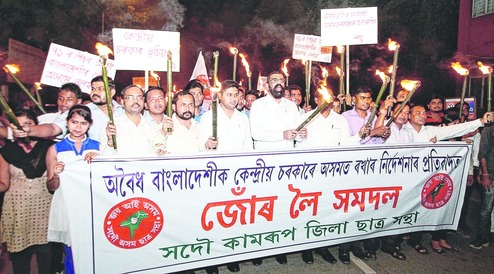 Sowing the Seeds of Another Agitation in Assam

Sowing the Seeds of Another Agitation in Assam

Editor-in-Chief of indiacommentary.com. Current Affairs analyst and political commentator. Writes for a number of publications. View all posts by this Author
Assam is flooded with the waters of the overflowing Brahmaputra following widespread rains in the state. Now, the NDA government wants to flood it with Bangladeshi Hindu aliens. In a notification published in the official gazette, the Union government has exempted Bangladeshi Hindus entering the country (Assam bears the maximum influx) on or before December 31, 2014 from having valid entry papers as per the provisions of the Passport (Entry into India) Act, 1920 and the Foreigners Act, 1946. The state had witnessed a prolonged, divisive and often bloody agitation in the 70Ã¢â¬â ¢s and 80Ã¢â¬â ¢s against this very issue. Although those who had spearheaded the agitation then had faded away after some years in the sunshine, the recent notification has given them ammunition to regroup and whip up regional passions again.

This time though, their anger is justified. During his election campaign last year, Narendra Modi had played to the gallery in Assam and West Bengal by repeatedly saying that illegal immigrants from Bangladesh would be identified and deported. He was then identifying a problem that had caused much local discontent in both states. Census figures had repeatedly shown that influx of illegal Bangladeshis from the neighbouring country had unnaturally increased the number of Muslims living in the border areas of these two states. But now, by deciding to allow Bangladeshi Hindus who entered India before 2014 to remain here, Modi has gone back on his words.

There are several things that need to be taken into consideration before any such decision is taken. As the government has not chosen to explain its stand, it can be safely assumed that this is a ploy to win the support of Hindu groups and the government has not gone into the complexities involved. The Assam accord specifically said that anyone who came after March 24, 1971, just a day before the war with Pakistan to liberate Bangladesh, would be identified and deported. Why is the accord being rubbished? The Assam governor, P B Acharya has even said that Ã¢â¬Åthere is nothing sacrosanctÃ¢â¬Â about the accord. That was a very loose thing to say by a person holding such a high office. Any accord signed by the government of India has to be sacrosanct till rescinded or renegotiated. Assamese society is being swamped by these illegal immigrants whose language and culture is distinctly different. The question is: why should Assam, which has registered the largest influx in the past, be made to bear the brunt once again.

The Union government is sowing the seeds of another prolonged agitation in the state. Already, All Assam StudentsÃ¢â¬â ¢ Union (AASU), the body that had spearheaded the anti-foreignerÃ¢â¬â ¢s agitation from 1979 to 1985, has warned the governor against making any derogatory remarks on the Assam accord. AASU and Asom Gana Parishad (AGP) have decided to actively oppose the notification and took out a torch rally in state capital Guwahati on 10th September. Prafulla Kumar Mohanta, student leader during the agitation and chief minister thereafter, has said that he will mobilize his old comrades to oppose the notification. The Assam Sanmilito Mahasangha, an umbrella body of indigenous organizations has condemned the notification. Various local organizations have given calls for strikes. The state is clearly in turmoil.

The worst part is that all this comes at a time when the process of updating the National Register of Citizens (NRC) to detect illegal immigrants is going on in the state. It is clear that the new notification will stall and complicate the process, leading to inordinate delays and possibly, abandonment. There should normally be no issues if the government wishes to legalize the entry and stay of Bangladeshi Hindus on the compassionate ground that they are persecuted in their country (Ã¢â¬Åwhere else will they goÃ¢â¬Â is the common refrain of Hindu groups). Most nations in the world do this for persecuted people on many grounds. But without a well chalked out plan for their rehabilitation and relocation, such a blanket allowance is arbitrary and highly burdensome for Assam. The government should first decide where these illegal immigrants are to be settled and how are they to be rehabilitated before committing anything. For, clearly, Assam and its people have had enough of these aliens.