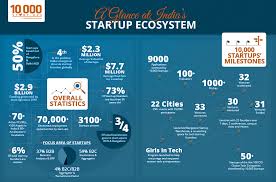 Editor-in-Chief of indiacommentary.com. Current Affairs analyst and political commentator. Writes for a number of publications. View all posts by this Author
image courtesy: nasscom.in

The very fact that there were over one lakh requisitions for the approximately 1500 passes available for the governmentâs âStart Up Indiaâ show shows that budding talent wants to strike out on its own. Young India is now bursting with innovative ideas and it is our duty to ensure that the workable among them are allowed to flourish and the others are at least given a fair chance to try. Even if they fail, they will learn from their failures and perhaps come up with a better plan next time.

It is not as if innovation did not strike the Indian mind in the past. But most of it was crushed under bureaucratic red tape which found anything new and untried that deviated from existing norms as quirky. Outdated government norms have buried the dreams of generations of Indians. Those who got the chance left India and pursued it elsewhere. Others just rued their bad luck and pursued mundane things. In the process the nation was deprived of innovation and enterprise.

Controls and unnecessary bureaucratic interference are surefire ways of killing innovation. Normal bureaucrats go not understand new things. Normal financial channels are also not available to innovators as the banks are shy of taking risks as per existing norms. Hence, it is good the government is doing its share to kick-start the startups. The realization in government circles that startups have different needs is bound to change bureaucratic and banking mindset.

Private investors had recognized this fact long time back and had supported startups through incubation, handholding, mentoring and financing at various stages of their journey. While some investors have burnt their fingers in plans that failed, most have made good. That is the only reason why the startup space is buzzing and many more people are coming up with new ideas and more investors are also joining the party. But the government initiative is likely to expand the reach manifold. If done properly and without bureaucratic bungling, it will change for better the way India does business.