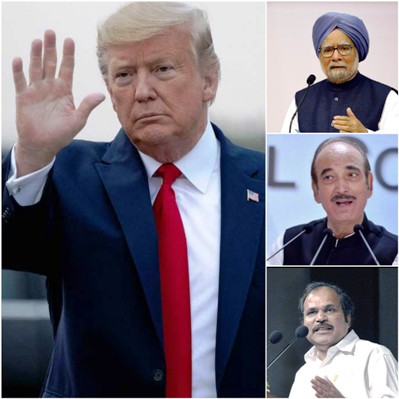 Aggrieved by the fact that Sonia Gandhi has not been invited to the State dinner being hosted for visiting US President Donald Trump at the Rashtrapati Bhawan, the Congress has decided not to send any representatives to the event. Ghulam Nabi Azad, the leader of the Congress in the Rajya Sabha and Adhir Ranjan Choudhary, the leader in the Lok Sabha were invited but both have declined the invite. Former Prime Minister Dr. Manmohan Singh, who was invited late (there was no invitation until Sunday evening) has also declined the invitation and will not attend.

The Congress displeasure is also due to the fact that no meeting has been arranged by the government between Trump and the main opposition party, as has been the tradition with visiting dignitaries. The government is giving the impression that this is a visit where only the government will call the shots. But in a democracy, any visiting leader must be allowed to meet politicians across the spectrum. If the government did not want a Congress delegation to meet Trump for political reasons, it could have scheduled a meeting with an all-party delegation. The government might say that the US President was pressed for time as the operative part of the visit was just for a single day, but since all other meetings and events were organized, a meeting with the opposition parties was in order and would not have shown the government as disrespectful of traditions.

But the Congress is also in the wrong for boycotting the event. Dr. Singh, Azad and Choudhary should have attended the dinner under protest. A State dinner for a visiting president is not the time to settle political scores. It lowers the dignity of the event and the prestige of the nation for invitees not to attend purely due to any political grievance. The Congress trio should have made the most of the opportunity and should have interacted with Trump. One is sure he would have given time to Dr. Singh and he could have made him aware of the party's stand on issues. It would have earned a lot of brownie points for the Congress while showing the government in a bad light. But by choosing not to attend, the Congress has diluted the negative effects of the government's decisions.