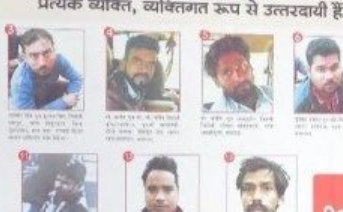 The UP government has decided to challenge the Allahabad High Court ruling that asked it to remove the so-called "name and shame" posters it had put up across the state. These posters were of the alleged anti-CAA rioters who had allegedly damaged public property and from whom it had demanded compensation. This stand of the state government shows its ignorance of due process and reeks of vindictiveness. It also shows that the administration does not want to follow due process and has no faith in the legal system.

The very fact that the UP police could not produce evidence in court to support its various claims against those it arrested in the brutal crackdown on the violent protestors in the wake of the anti-CAA stir in the state in December points to the fact that arrests were made indiscriminately. The crimes have not been proven, yet the government has tried to name and shame those it has accused. This is blatantly illegal.

Then there is the question of compromising the privacy of the people named. The posters carry the names, photographs and personal data of the charged persons. Why should these people face the ignominy of being so shamed when their crime has not been proved in a court of law? Further, in these hate-filled times, they can easily be targeted by vigilante groups and can even be liquidated by them.

The UP government, instead of being inflexible and adamant, must heed the advice of the Allahabad High Court and remove the posters. It should follow due process and first prove the crime. If the persons are convicted and then fail to pay the compensation legally demanded, why just name and shame the government can take all legally permissible measures to recover the amount, including attaching their property. But such illegal action before the crime is proven smacks of highhandedness and is not compatible with good governance in a democracy.

Even as this was being written, a vacation bench of the Supreme Court has rightly ruled that there is no law in India under which the UP government can put up such posters. It has referred the issue of breach of privacy to a larger bench. This must drill some sense into the UP government that it cannot do whatever it pleases. There is due process in India and all governments must follow it at all times. The government must now remove the offending posters without any delay.