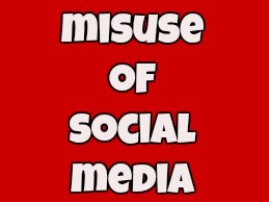 Before blogging and social media made it easy for people to have their say, the only outlet for people with an opinion was the tiny "letters to the editor" space in print publications where they sent their views which were heavily edited by a desk hack "for reasons of space and clarity". But the difference between having your say in print then and having it online now is that then you had to provide your full address and a telephone number and were not allowed to be personal or abusive. Your identity was established and you were responsible for your actions. Now, online, you have the shield of anonymity and the results are there for everyone to see. The other difference was that letters printed then could cause a flutter in some circles, reaching, say, 10000 readers, but material posted now can go viral in a flash and tens of thousands of people can be involved in a matter of hours. But anonymity has spawned personal attacks, vilest of abuses and threats of rape, murder and acid attacks. Freedom of speech is being misused online with impunity.

It is against this background that one must view the notice issued by the Supreme Court to the Centre to file an affidavit within three weeks to spell out a strategy to get social media platforms to share information with law enforcement agencies without compromising the privacy of citizens. The apex court was concerned that no simple and fast legal remedy was available to ordinary citizens who are subjected to trolling and abuse by miscreants who hide behind the wall of anonymity. Instead, despite the striking down of Section 66A of the IT Act, governments, both at the Centre and in the states, have regularly shown complete intolerance to criticism and have booked netizens for even harmless forwards from their social media accounts. Yet, when it comes to protecting the rights of ordinary citizens, the same urgency is not shown by law enforcement agencies.

Hence, there is no doubt guidelines are required to manage the complete mess that social media finds itself in regarding the misuse of the platforms to abuse others. But since there are several conflicting rights involved, existing laws in India can be applied to redress the grievances; there is no need to enact a new coercive law. A balance has to be struck between protecting privacy and fixing accountability. But the government must act as a facilitator and not a regulator. There are enough laws that can be used to book miscreants in they are forced to verify their identity at the time of registering for social media accounts. No one should be allowed to use such accounts anonymously.

For this, linking Aadhar with social media accounts to establish the identity of users can be looked into. But the greatest drawback is that the social media platforms have consistently failed to protect the data citizens submit to them. Facebook was embroiled in the Cambridge Analytica scandal and there are allegations against other social media platforms for sharing or even selling the private data of users. Hence, can they be trusted with the Aadhar data? The answer to this is that just the number, name, address, mobile number and photo, and not the biometric data, can be accessed from the Aadhar database to establish the identity of users on social media platforms. This information is in any case provided by all those who register on social media platforms. For, as long as the wall of anonymity exists trolling and abuse will not stop. Miscreants will use the social media responsibly only when they use verified accounts and know that that they can be traced and caught for abusing others.