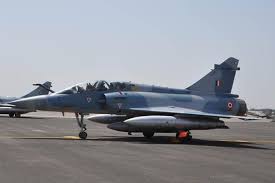 Editor-in-Chief of indiacommentary.com. Current Affairs analyst and political commentator. Writes for a number of publications. View all posts by this Author
The ghastly attack on the CRPF convoy needed a proper and measured response from India. The people of the country were seething and the armed forces were itching to give e fitting reply to the terror mongers. In the end, the Indian Air Force did it in style by cutting out the fancy stuff. Laser-guided bombs weighing 1000 kgs were precision dropped on the main Jaish training camp where a large number of terrorists were being trained amidst reports that they were planning another big suicide attack. Terror launch pads in Balakote and other areas of Muzaffarabad sector were completely destroyed. The 12 Mirage jets returned after successfully completing the operation with the desired effect.

As ususal, the Pakistanis were up to their propaganda ploys. They immediately said that although Indian jets violated Pakistani airspace, they dropped the bombs hastily in vacant spaces after the Pakistani air force responded. The Pakistani military establishment, shocked by the Indian strikes, huddled into emergency meetings.

The Indian government has said that the strikes were non-military and pre-emptive in nature. Foreign secretary Vijay Gokhale said that despite India having provided ample proof of the existence of the Jaish camp at Balakote, there was no action from Pakistan, making the strikes absolutely necessary. He also said that a large number of handlers, trainers and terrorists were wiped out in the successful operation.

It would be interesting to see how Pakistan responds. It has been carrying out a proxy war against India by sending terrorists to carry out attacks on civilian and military targets. India has now twice responded by striking at terror factories inside Pakistan. The military establishment there will now try to convince the civilian government to make an appropriate military response. The situation can aggravate in to a full scale war if the international community does not impress upon the Pakistanis that India has just destroyed terror camps and its intentions were not to harm Pakistan.