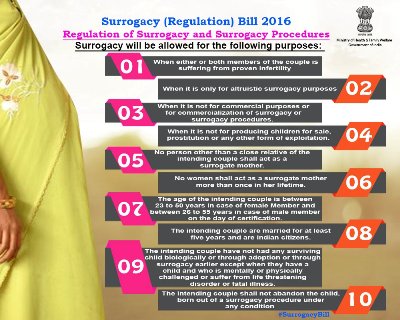 Editor-in-Chief of indiacommentary.com. Current Affairs analyst and political commentator. Writes for a number of publications. View all posts by this Author
Regulation was needed
Surrogacy was an unregulated area for long and it had made India a hub of 'renting-a-womb' commercially. It had led to exploitation of women and involvement of shady characters in the largely medical procedure. There was a crying need for a definite law to regulate assisted reproduction. In fact, the government had circulated a draft Assisted Reproductive Technology (Regulation) Bill in 2015 and feedback was solicited from stakeholders and public in general. But the government is now proposing a surrogacy law vastly different from the proposals in the draft bill. As the government chose to explain why it was doing this with lectures on Indian culture, the proposed surrogacy bill has already been dubbed as the Sanskari bill by some commentators.

Rights of mother and child need to be protected
Unregulated IVF procedures and surrogacy is in no ones interests. It has kept the field open for unscrupulous characters to fleece would be parents on the one hand and deprived women willing to lend their wombs for surrogacy their rightful remuneration on the other. It has also spawned a class of doctors who experiment with the bodies of women. The rights of the surrogate mother and unborn child were also provided for, especially in the light of a case where a surrogate baby was abandoned after her commissioning Japanese parents divorced before it was born. The draft ART(R) Bill had prescribed for detailed regulations and punishments for violation. It had also provided for a woman to be a surrogate only once in her life. It gave the impression that controlled and regulated commercial surrogacy would be allowed.

The new bill will only give rise to unethical practises
But now, the proposed Surrogacy (Regulation) Bill provides for a complete ban on commercial surrogacy and proposes altruistic surrogacy where only a married couple wishing to have a child through surrogacy can be helped in the procedure by a close relative without any kind of payment. Given the realities on the ground, this will only push the trade underground and a black market in IVF procedures would come up soon. Women willing to be surrogates would be paid in untraceable cash and will falsely swear an affidavit before a judicial magistrate claiming to be a close relative of the commissioning couple. The cost of surrogacy will increase and the exploitation of poor women willing to be surrogates will increase. There will also be falsification of records to allow willing women to lend their wombs more than once. Unethical doctors will have a field day.

Indian culture is not rigid
Further, the proposed bill takes Indian cultural ethos to be a fixed or rigid thing incapable of evolving over time. It does not address the modern reality where singles, homosexuals or live-in couples might wish to have a biological child through the surrogacy route. It pre-supposes that all these three classes will make for bad parents. Banning commercial surrogacy is the prerogative of the government and it can do so if it thinks it can enforce the ban properly. But closing the door on classes of people who are increasing in number through self choice is denying them their rights (except perhaps in the case of homosexuals whom the law still considers as criminals). If a married couple is allowed altruistic surrogacy, the same should be allowed for singles and live-ins, as long as the rights of the child so born are well defined and the interests of the surrogate mother are protected. Social mores in India have changed and are continuously changing. Laws should factor in these changes to remain relevant.