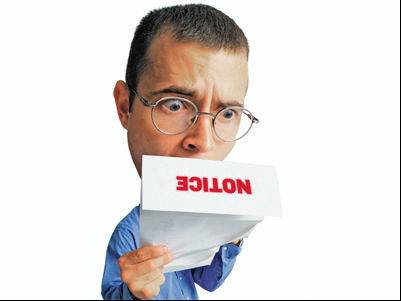 Editor-in-Chief of indiacommentary.com. Current Affairs analyst and political commentator. Writes for a number of publications. View all posts by this Author
The real fun has started. Post demonetization, the Income Tax department has started sending out tax notices to people who have deposited old currency notes of more than Rs 2.5 lakhs in their account. India Commentary has accessed one such notice sent by DDIT (INV) of Siliguri to a party in Gangtok. The party had deposited Rs 4.51 lakhs on 13th November and the notice is dated 18th November. This is real fast when one considers the fact that the banks report such transactions to the IT department periodically and the department takes its own sweet time to sift through the data to prepare and send the notices. In the present circumstances, banks are overburdened with demonetization work and the staff is already stressed beyond limit. Hence, it is surprising that a deposit made on 13th November was reported in 4/5 days and the IT department acted on the information as soon as it received it.

This signals that reporting norms have been tightened considerably, bankers have been instructed to be prompt in reporting, maybe on a daily basis, and the information grid has been made extra efficient. As for the IT department, it has the biggest role to play if the country has any hopes of bringing evaders in the tax net or snuffing out black money from the economy. Hence, their promptness in sending out tax notices is understandable. The whole process and the speed with which it is being executed shows that the government is extremely serious about the whole thing and to facilitate this, it has brought about a remarkable coordination between various agencies.

Apologists for the parallel economy cite many examples of how the rural economy will collapse and how India will suffer a setback in its genuine economy too if the parallel economy, which thrives mainly on cash transactions, is not allowed to carry on with its devious ways. But they fail to understand that no one is complaining about or talks of stopping all cash transactions. It is quite evident that the rural wholesale market for agro-products will have to make purchases in cash. The small farmer will, as of now, not sell his produce if greenbacks are not shown to him. But when this purchase is not genuinely reported, or not reported at all and the subsequent sale is also made in cash and the chain continues, a large part of the income generated escapes the tax net. Who benefits from this? Pay no tax but castigate the government for bad roads or other problems, is the motto of this class. And this is just one example. There are several such chains which operate only on cash and never report their incomes. Shall we continue to allow them to make a mockery of our tax laws and keep on laughing at the expense of the honest tax payers?

Take the example of professionals. Doctors have amassed huge fortunes by taking all fees in cash and never issuing a receipt. The racket is exposed when one approaches a surgeon for any surgery. The surgeon will quote a substantially lower rate if one is not covered by medical insurance and will accept payment only in cash without issuing a receipt. When questioned, their stock reply is that first of all, the insurance company pays late and secondly, since the amount is paid by banking channels, the whole amount becomes taxable. Same is the case with lawyers. No lawyer issues a receipt for his services unless asked for. His rate if receipt is demanded is substantially higher than if it is not.

Hence, all those who have deposited above Rs 2.5 lakhs will now have to explain the source of their funds to the IT department. While this is not a new thing and people have been getting such tax notices for the last several years, the scan will be conducted much strictly this time. Basically, the department is asking for the ITRs of last two years, balance sheets for a similar period and books of accounts (in case of business entities) or cash flow statement (in case of individuals) supported by bank statements and other documents like bills, vouchers etc. if one is assessed to tax and the source of funds with bank statements and other supporting documents if one is not assessed to tax. A sudden surge in income for current financial year (2016-17) will have to be thoroughly explained with all supporting documents. In normal times, the resourceful would have got time to arrange all papers in connivance with devious tax advisors and unethical chartered accountants. But the department is unlikely to give them the time. The only escape is possible for those who have been carrying cash in hand in their balance sheets, but one never knows what the department will think about that also. So be prepared to face many questions and be ready with your answers. Otherwise, tax as per applicable slab, interest thereon and a 200% penalty will stare you in the face.