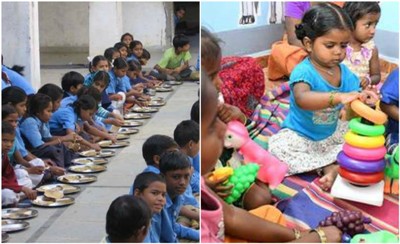 Several disconcerting facts emerge from Pratham's latest Annual State of Education Report (ASER) that needs the immediate attention of the government. This year the focus was on the state of education of children between 4 to 8 years. That means the report made a detailed study of pre-school education, including the much-touted aanganwadi system, and the children who enroll in a proper school for the first time and reach the third standard. This is the most interesting phase of a child's development and the report is very timely.

But what comes out of the study is not at all heartening. The first problem lies in those who get enrolled for standard one in a school. It is generally accepted that a child of six is ideally suited to be in standard one. Even the Right to Education Act (RTE) mandates it. But the report finds that more than 20% of the children are below six years when they get enrolled and more than 36 are older. The report states that "even within Standard I, children's performance on cognitive, early language, early numeracy, and social and emotional learning tasks is strongly related to their age. Older children do better on all tasks." It calls for a curriculum that is based on "developing problem-solving faculties and building memory of children, and not content knowledge." This is in line with the universally-accepted theory that children between 4 and 8 years of age acquire learning skills better through play-based activities.

The report also examines the aanganwadi system in detail. It finds that a system that was developed 40 years ago and has not been overhauled since then, barring some cosmetic changes, is groaning and not suited to impart the best cognitive skills to children due to numerous reasons. Since children below six years of age are being admitted to standard 1, the report points out for a need for more aanganwadis. But at the same time, it points out the flaws in the system. It says that the poorly paid aanganwadi workers are often not trained with the skills needed to impart cognitive skills to such children. Aanganwadis often resemble centres that are there just to implement the nutrition schemes of providing mid-day meal and even there, the huge corruption (there are reports of children being given only rotis and salt and even contaminated meals) underscores their value.

The importance of pre-school learning, recognized even by the draft education policy released recently, is seldom met by such a system that needs a complete overhaul and more funds to create better infrastructure and employ trained staff by giving them better salaries. The importance of this can be better understood if we see that the enrolment of children in the 4 to 8 years age bracket in India matches that of the developed countries but only 26 percent of these go for higher studies, a figure that suggests that there are serious flaws in our education system right from pre-school to higher secondary. The government needs to pay attention to this.