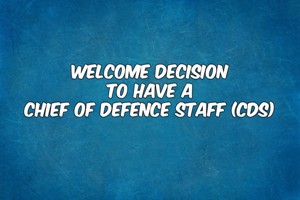 The CDS Is Expected To Ensure Coordination Between The Three Services

The CDS Is Expected To Ensure Coordination Between The Three Services

The decision of the Union Cabinet in approving the post of the Chief of Defence Staff (CDS) who will function as the Secretary, Department of Military Affairs is most welcome. He or she is to be a four-star general. There is an urgent need to have an officer of such rank who can bring about the much-needed coordination between the three arms of the India armed forces. This need was first identified after the Kargil war by the Kargil Review Committee, helmed by the late K Subrahmanyam and the post and its requirements were later spelled out in detail by the Group of Ministers (GoM) on National Security in the government headed by the late Atal Behari Vajpayee. Somehow, the idea was favoured neither by the Vajpayee government nor by the UPA regimes that succeeded it. Hence it is good that the present government has made a decisive shift in the matter.

Ever since Independence, the Air Force, the Navy and the Army have all been headed by a separate chief and have largely remained independent of each other in almost all matters, whether they be of procurement, personnel or deployment. Hence, the three services were obviously wary of such a post being created. They did not want to be subordinates of a roving officer who had command over all the three services. The government has now made it clear that no such role will be assigned to the CDS who will work more as a military advisor to the political leadership. Then, since the CDS is going to be a Secretary with the government of India, the administrative services were also viewing the creation of the post with some amount of alarm.  But the Narendra Modi government seems to have taken all stakeholders in confidence and it appears that their concerns have been addressed. The country is soon likely to have its first CDS.

The change that the CDS is expected to bring in is not easy to achieve given that he (one is using the masculine gender purposely since there are no female four-star generals in India as of now) will have to change the independent mindset ingrained in the three services for so many years. Jointness is conspicuous by its absence in all things military in India, with each service guarding its turf almost ferociously. But given the changing security scenario across the world and especially in the immediate vicinity of the Indian sub-continent, the armed forces will have to coordinate among each other and function in a joint manner with increasing regularity. As per the Cabinet note, the first CDS will have three years to achieve the roadmap laid out for this ambitious reform. Hence it goes without saying that the incumbent is given a three-year fixed-term for him to complete the job.