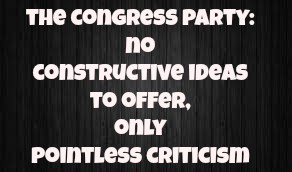 The Congress Party: No Light At The End Of The Tunnel

The Congress Party: No Light At The End Of The Tunnel

The Congress party has either become bereft of ideas or does not value the importance of a pandemic. The responses of its leadership in recent times have shown that it is going further away from the people. Starting at the top, when Prime Minister Modi asked for suggestions from the opposition in ways to combat the pandemic, Congress interim president Sonia Gandhi wrote a letter which just suggested the ways in which the government could save money (by cutting on what she thought were unwanted expenditure) and direct it towards the fund to fight COVID-19. Granted that funds are a necessity and in that sense her suggestions were valuable, but nowhere in her letter did she mention a single way in which the real fight could be carried out. For instance, the Congress government in Rajasthan has done wonderfully well to control the spread of coronavirus in Bhilwara. Sonia could have mentioned that in her reply and could have suggested that the Bhilwara model should be followed in hotspots and clusters. As this was being written, it has been reported that Sonia Gandhi has written one more letter to Modi suggesting ways to provide food security to the poor during these troubled times. This is a good initiative by her.

Now, Rahul Gandhi is saying that the economic disruption due to COVID-19 has made many Indian firms weak and they will become easy targets for takeover by foreign firms. Throughout February and March, the only thing Rahul Gandhi has done is to criticize each and every measure taken by the Centre to fight the pandemic, without ever suggesting what could have been the better alternative. Mr Gandhi does not have any policy of his own but is quick to rubbish whatever is being done to fight the pandemic. He must realize that Dr Manmohan Singh is no longer the Prime Minister and he cannot go around tearing off policy documents. He has to come out of his Bhishma Pitamah mode. To be taken seriously, Gandhi has to offer constructive criticism that suggests alternative ways. Even P Chidambaram has been more constructive than him.

But the cake goes to Kamal Nath. He is still in denial mode as to the revolt in the state Congress. Nath has said that the lockdown was delayed as the government first wanted to topple the Madhya Pradesh government. How can a supposedly responsible political leader like him think along these lines? Will a Central government play with the lives of millions of citizens just to topple a state government? He should know that such decisions are tough to take and involve inputs from many experts. The government has to examine each aspect minutely before locking down a country of 133 billion people. Nath must work to revitalize the MP Congress instead of making such stupid comments.

This is not the time to play politics. The pandemic is threatening the lives and livelihood of the majority of Indians. The government is doing the best it can. It has also been calling for suggestions from the opposition. The least they can do is to apply their minds and come out with concrete ideas that can benefit the citizens. Only then will the people be inclined to support them in the future. Sonia Gandhi has taken the first step today but many more ideas need to be put forward by the party. Mere criticism of government policies in these troubled times will take them further away from the people.