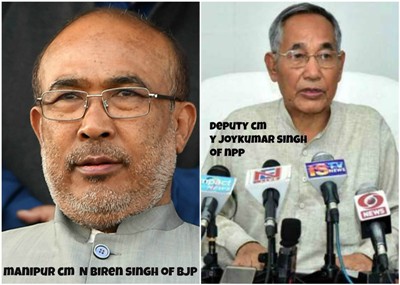 The Congress Turns The Tables In Manipur

The Congress Turns The Tables In Manipur

For once, the Congress has turned the tables on the BJP in Manipur. But what is happening in the state is par for the course given the ugly coalition history of the states in the North-East. Most states in the region were dominated by the Congress and the various regional parties till now. The BJP is an emerging player and had little or no presence in the region even 10 years back. Barring Assam, the politics of the region is dominated by a pervasive desire for power and legislators change affiliations quite often. Money talks and the promise of the fruits of office can turn a lifelong foe into a friend of convenience for the sake of forming the government.

Hence, when N Biren Singh, the current chief minister of Mizoram, left the Congress in 2017 and assumed office as the head of a coalition government led by the BJP, it was a given that his government would not last long. The BJP then had only 21 MLAs against the 28 of the Congress in the 60 member assembly. But it formed the government with support from the NPP and others. All the 4 NPP MLAs were 'rewarded' with plum ministries. The present crisis has arisen because Biren Singh has taken away the portfolios of NPPs Y Joykumar Singh, who is the deputy chief minister in the BJP-led coalition, ostensibly over the rice distribution scam in the state. This was the culmination of a year-long power tussle between the chief minister and his deputy.

In a swift reaction to Biren Singhâs decision, all four NPP ministers resigned from their posts and the party withdrew its support to the government. Three BJP MLAs also resigned to plunge the alliance into a crisis. The lone TMC MLA and an Independent also withdrew support. If the seven MLAs who won on the Congress ticket but supported the BJP and stand disqualified are not allowed to vote, the assembly strength will fall to 49. The newly-formed Secular Progressive Front (SPF) led by the Congress and including the NPP, the TMC and an Independent, claims to have majority support and has already served a no-confidence notice.

But even if the SPF manages to form the government, it will not bring political stability to the state. The numbers are not strongly in favour of any alliance. A few resignations and the new government will find itself grasping for air. It is time to take a fresh look at the so-called anti-defection law and make it stringent so that defections of convenience do not happen and lure of a plum post is not used to engineer defections. A cooling-off period (before which he or she cannot be appointed to any ministerial or other government post) needs to be prescribed for any legislator who changes parties after winning an election, if it is not feasible to make it compulsory for her or him to seek a reelection.