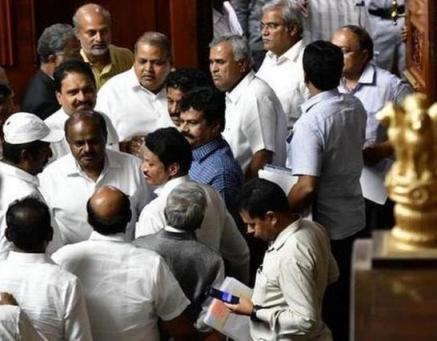 The trust vote in Karnataka did not happen today. After an inconclusive debate, the Speaker adjourned the house till 11 am tomorrow. This after a delegation of BJP leaders met the state Governor and requested him to direct the Speaker to hold the vote today. The Governor did ask the Speaker for the same but KR Ramesh Kumar ignored the advice. The BJP has decided to sit on dharna inside the well of the house tonight to register its protest.

The debate was marred by protests from Congress benches over the alleged surfacing of rebel MLA Shrimant Patil in a private hospital in Mumbai. The Congressmen also wanted the vote to be deferred unless a clearer picture emerged on the Supreme Court ruling. But the writing was on the wall for the alliance. A total of 19 MLAs did not attend the house. This brought down the house strength to 205. With just under 100 MLAs, the alliance was sure to lose if voting took place today. Hence, it has been deferred until tomorrow.

At the heart of the issue is whether the Speaker should accept the resignations of the 16 MLAs or whether he should disqualify them. Although it does not make a difference in the numbers game (for, in either case, those MLAs will not vote) but if they are disqualified, they will not be able to become ministers in case the BJP forms the next government. They will have to first seek reelection and then think of being ministers. The Congress-JD(S) alliance wants that the turncoats do not get an immediate reward for their act of deserting the alliance.

But what is happening is sickening. Democracy is being murdered. The Centre should think of amending the Tenth Schedule of the Constitution (popularly referred to as the Anti-Defection Law) to clearly define resignation and disqualification and explain situations where each will apply. For, in the present case, the question of disqualification arose only after the MLAs resigned and the alliance issued a whip for them to attend the assembly, inviting disqualification if they chose to ignore the whip. The law must be amended to give preference to events as per dateline. Also, suitable amendments must also be made in the law to provide a time-frame within which the Speaker of any house has to decide on resignations and disqualification matters.