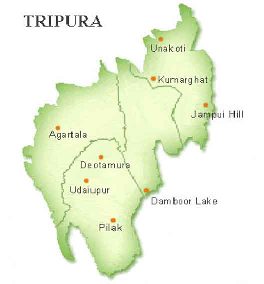 The Lotus Replaces Hammer-Sickle in Tripura

The Lotus Replaces Hammer-Sickle in Tripura

Editor-in-Chief of indiacommentary.com. Current Affairs analyst and political commentator. Writes for a number of publications. View all posts by this Author
While all indicators pointed to a defeat of the CPM in Tripura, the actual results stunned all. It was the margin of victory that was spectacular. It seemed that the urge for poriborton, or change, was so strong that even the squeaky clean image of Manik Sarkar and the pleas to uphold secularism by rejecting the BJP fell on deaf ears. People voted out the CPM with a vengeance only matched when they did so similarly in West Bengal in 2011. A nearly 3/4th majority (the BJP alliance has secured 43 out of the 59 seats that voted) is a huge achievement in a state known to be a red bastion.

What worked for the BJP was the near absence of progress in Tripura. It seemed that time had stood still in the state and it remained where it was a decade back. Although Manik Sarkar himself was not corrupt, charges of corruption and nepotism abounded against his ministers and other big-wigs in the state party. A situation similar to that in Bengal in 2011 built up  the CPM tried to control all aspects of public life. It was considered an unwanted intrusion by many. Further, the emotive issue of unchecked infiltration from Bangladesh to build up a vote bank was resented by the original residents of the state.

With BJP making steady inroads in the north-east and promising fast development of the region, the people of Tripura did not want to be left behind. They have decided to give the BJP a chance after dismal performance by a party that professed to work for the people but did so only for a certain class of people. With this win in Tripura  termed historic by the Prime Minister Narendra Modi  the BJP has managed to truly relegate the CPM to near irrelevance in Indian politics. All this has been made possible in no small measure by the tireless efforts and extreme political cunning of Himanta Biswa Sarma, the point man of the BJP in the north-east.