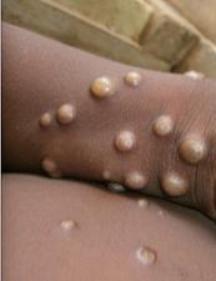 Even as the world has not fully recovered from the shock and disruptions of the Covid pandemic, a new virus that is spreading monkeypox around the world has been detected. Already 92 cases have been confirmed in 12 countries. WHO held an emergency meeting and said that since the situation was evolving it is keeping a close watch on countries where the disease is not endemic and studying other factors before taking a decision on what needs to be done. Meanwhile, it warned that the virus might spread fast to other countries as travel restrictions due to the Covid pandemic have been removed.

Monkeypox is spread by a virus belonging to the Poxviridae family of viruses which also spread smallpox and cowpox. It is endemic in west and central Africa. It was first detected in 1958 in monkeys kept for research and the first human case was detected in 1970. The symptoms include fever, aches and the swelling of the lymph nodes leading to bumpy rashes. It is related to smallpox but is milder in nature. It lasts two to four weeks and the fatality rate is around 1% (although some experts say it is between 3 to 6%).

But the good news is that it is not contagious in the sense that unlike Covid, it is not spread through the respiratory tract but infection usually happens if one has skin-to-skin contact with an infected person who is symptomatic. Hence, its spread can be controlled more easily than Covid. Remedies include inoculation with the smallpox vaccine (which, according to WHO, is effective against monkeypox) to prevent infection and anti-viral drugs to provide relief to infected persons.

As of now, Portugal, Spain and the UK are worst affected while cases have also been detected in Belgium, Canada, Australia and the US. Belgium has become the first country to provide for compulsory quarantine for infected persons. Although the first few cases were travel-related (where infected persons had returned from Africa), local infections are now being detected in many countries. WHO has also reported that most infections are among men and many among men who had sex with other men.

Experts in India have said that although there is no need to panic, there is need to be vigilant and those travelling to west and central Africa must be kept under watch. They have advised people who develop rashes to seek immediate medical attention and also advised that others should not come into close contact with people who have rashes.