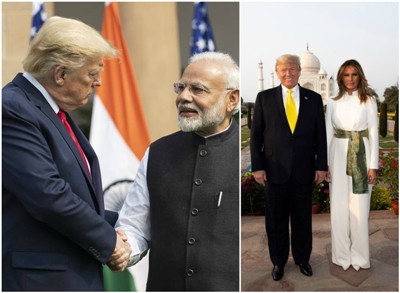 The Trump Visit: Both Style And Substance

The Trump Visit: Both Style And Substance

Was the short visit of Donald Trump, the President of the United States of America, all style and no substance? Most critics will say so given the abundance of events, receptions and photo-ops and the paucity of deals struck or MOU's made. But visits by foreign heads of governments are not only always about deals or alliances. They are as much to send signals to the world community as to lay the ground for enhanced cooperation in the future. If the Trump visit is gauged on the last two parameters, substantial gains will be seen.

There is no doubt that the trade deal, the biggest sore point in Indo-US relations at present, did not happen. But was there any indication from both sides that it will take place? In fact, US officials were categorical before the President's visit that given the number of obstacles, a trade deal was highly unlikely. But there were many obstacles that were removed during the visit. India has, sensibly, decided to avoid negotiating with the US on trade under the MFN framework and move towards a bilateral understanding. This is a big move forward and it will perhaps help in settling the dispute over market access to dairy products and medical devices from the US and other sore points.

The $3billion defense deal that was struck for India to get top of the line military helicopters and other hardware from the US is path-breaking in the sense that it signifies the increased US willingness to have military alliances with India. The two leaders also made references to the Belt and Road Initiative and the Chinese maneuvers in the South China Sea. President Trump also stressed the importance of the Quadrilateral Security Dialogue, an informal strategic dialogue between the US, Japan, Australia and India. The US knows that India is a major nation that can help it in keeping a check on China's geopolitical ambitions in the Indo-Pacific region. The obvious next step for the two countries is to talk about a concrete partnership that encompasses both military and business collaboration to stop China's hegemony in the region.

The US President cited his strong equation with Pakistani Prime Minister Imran Khan to assure India that the latter was working to deal with cross border terrorism. He also said that his friendship with leaders of both the nations put him at an advantage to mediate in Kashmir but he wisely did not press the point. But in a signal to the world, Donald Trump also did not choose to raise the issue of the restrictions and continued incarceration of political leaders in Kashmir. He also chose to avoid the issue of CAA which he said was for India to deal with. Trump, in fact, said that Prime Minister Modi wanted "religious freedom" for all. As India faces continued criticism from many quarters over the three issues, the silence of the US President will be a huge diplomatic boost for the country.

The Trump visit is likely to result in an increased military and business cooperation in the near future. It is also likely to bring India and the US closer diplomatically. The trade deal will now be taken forward under a bilateral framework and is most likely to materialize in a few months. The biggest gain will be that since Trump was mighty impressed by the reception he got in India and since he shares a great personal rapport with Modi, India's views will not be brushed aside and the US is more likely to treat them favourably as long as they are not inimical to US interests. Post the visit, the engagement between the US and India is likely to increase on all matters and that will be a huge benefit.