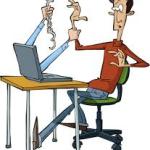 Editor-in-Chief of indiacommentary.com. Current Affairs analyst and political commentator. Writes for a number of publications. View all posts by this Author
Section 66A of the IT Act is once again in the news. A schoolboy from Bareilly was recently arrested for a Facebook post on UP minister and Samajvadi Party strongman Azam Khan. The UP police found the post derogatory and slapped charges under the said section on the boy. If this continues, we might as well bid goodbye to social media. The NDA government talks of a digital India and transparency on the one hand and continues to defend the obnoxious section in the Supreme Court on the other. Recently, the government submitted that since the reach of internet and social media was vast, Sec 66A was needed to curb inflammatory posts. This is in line with the thinking of most governments who, when confronted with new technology, seek to arm themselves with draconian powers. But this is a confused reaction, as laws framed to tackle new technology often go beyond the reasonable and become restrictive, going against the spirit of the constitution.

In the ongoing case against the section in the Supreme Court, the bench was constrained to ask the ASG as to who will decide what is Ã¢â¬Ågrossly offensive.Ã¢â¬Â The Court said that even different judges interpret the same law in different ways applying the same tests. So how could an offended person himself assume that a post is Ã¢â¬Ågrossly offensiveÃ¢â¬Â and how can the police take his word for it. The bench was scathing in criticizing the government when it said that Ã¢â¬Åwe have to judge the statute as it stands today. We are not concerned with your (government's) standÃ¢â¬Â when the ASG tried to explain the said stand.

In India, liberty of thought and expression as enshrined in the constitution is tempered by several draconian restrictions in the Indian Penal Code (IPC). With new age digital media taking over, the administration felt the need to further strangle this liberty and the wise men in parliament added the obnoxious sec 66A to the I.T. Act, 2000, which received presidential assent on February 5, 2009. That day marked the death of free speech on digital media in India. For, the section is so ambiguous; it becomes a potent tool in the hands of the administration to harass unsuspecting individuals. This is how it goes:

Ã¢â¬Å66A. Punishment for sending offensive messages through communication service, etc. Any person who sends, by means of a computer resource or a communication device,Ã¢â¬"

(a) any information that is grossly offensive or has menacing character; or

(b) any information which he knows to be false, but for the purpose of causing annoyance, inconvenience, danger, obstruction, insult, injury, criminal intimidation, enmity, hatred or ill will, persistently by making use of such computer resource or a communication device,

(c) any electronic mail or electronic mail message for the purpose of causing annoyance or inconvenience or to deceive or to mislead the addressee or recipient about the origin of such messages, shall be punishable with imprisonment for a term which may extend to three years and with fine.

The way the words Ã¢â¬Ågrossly offensive,Ã¢â¬Â Ã¢â¬Åmenacing character,Ã¢â¬Â Ã¢â¬Åcausing annoyance, inconvenience, danger, obstruction, insult, injury, criminal intimidation, enmity, hatred or ill willÃ¢â¬Â have been used leaves them open to various interpretations and leaves no room for netizens to defend themselves. Often, what is seen to be correct in print, television or speech becomes Ã¢â¬Ëgrossly offensiveÃ¢â¬â ¢ on internet.

Sometime back, two persons were arrested in quick succession, one in BJP ruled Goa and another in Congress ruled Karnataka Ã¢â¬" both for posting material found to be offensive to Narendra Modi, showing that the incidence of harassment remains whoever is in power. Newspapers and television talk shows carry much stronger criticism of those in power but they escape censure on the plea of freedom of press, while ordinary citizens are being subjected to harassment under sec. 66A. Article 19(1) (a) guarantees the right Ã¢â¬Ëto freedom of speech and expressionÃ¢â¬â ¢ to all citizens. This right, however, is not absolute (as in the First Amendment of the US Constitution). Rather, it is subject to article 19(2), which allows the State to make laws imposing Ã¢â¬Ëreasonable restrictionsÃ¢â¬â ¢ upon freedom of speech and expression in the interests of Ã¢â¬Ëthe sovereignty and integrity of IndiaÃ¢â¬â ¢, Ã¢â¬Ëthe security of the StateÃ¢â¬â ¢, Ã¢â¬Ëfriendly relations with foreign StatesÃ¢â¬â ¢, Ã¢â¬Ëpublic orderÃ¢â¬â ¢, Ã¢â¬Ëdecency or moralityÃ¢â¬â ¢ or in relation to Ã¢â¬Ëcontempt of court, defamation or incitement to an offence.Ã¢â¬â ¢ Sec 66A of the IT Act adds unreasonable restrictions using vague terms like Ã¢â¬Ëgrossly offensiveÃ¢â¬â ¢ and Ã¢â¬Ëmenacing character.Ã¢â¬â ¢

The list of those arrested under the section is long and the reasons for arrest are mostly not covered by the restrictions under Article 19(2). Here are some of the names arrested. This is a representative list and hundreds of other names can be found all over India.

1. Bareilly schoolboy for posting on Facebook against Azam Khan.

2. Sayed Waqar, a 24 year MBA student in Bhatkal, Karnataka, was arrested by Bangalore police for circulating a WhatsApp message against PM Modi. Charges were also slapped on him under sec. 505 of IPC.

3. Devu Chodankar, a Mumbai naval architect, who posted anti Modi remarks warning of a holocaust, faces arrest after his anticipatory bail plea was rejected by the courts.

6. Ambikesh Mahapatra in Kolkata for a cartoon lampooning Mamata Banerjee.

7. Ravi Srinivasan in Puducherry for an alleged defamatory tweet against Karti Chidambaram.

8. Cartoonist Aseem Trivedi for showing the ineffectiveness of parliament through his cartoons.

A Supreme Court directive had made the Union government make the rules a bit stringent in the wake of the public outrage when the Mumbai girls were arrested to make any arrest only after prior approval of the DCP or the IGP, but that is not enough. While this eliminates police station level mischief, it still gives the police too much discriminatory power given the vague wording of the section.

Further, it is to be discussed why spoken incendiary remarks of politicians, sermons from mosques and unrestricted blabber of the Hindu fringe are not considered grossly offensive and of menacing character while ordinary citizens are hauled over the charcoals for something they might have unsuspectingly forwarded from their digital gadget. With the proliferation of smart phones, tablets and laptops, citizens are airing their views in real time and are also forwarding things they find interesting to friends and closed groups. These incidents are going to multiply manifold as net penetration rises. Now is the time to have a proper debate into what is the Lakshman Rekha that needs to be adhered to when posting on social media, since freedom of speech and expression is not absolute in India. But this line should be well defined and not vague.

Just one example will suffice to prove my point. During the recent elections, when Modi upped the ante in West Bengal by repeatedly criticizing the TMC and Mamata Banerjee, its official spokesman and Rajya Sabha MP, Derek OÃ¢â¬â ¢Brien retweeted the AITC tweets that called him the Ã¢â¬Åbutcher of GujaratÃ¢â¬Â and instigator of riots in Gujarat. Is that epitaph not grossly inoffensive and of menacing character? It was posted on twitter and was a fit case for sec. 66A. But no arrests took place and people are being arrested for lesser offences. Further, since we have several sections in the IPC, like 505, 153(A) and 295(A), among others, that clearly define reasons, instead of having Sec 66A, law enforcement agencies can use the IPC sections by making them cover transmission by digital means.

Since the section leaves the interpretation of the terms it sanctions for arrest to the complainant and the law enforcing agencies, it provides them with infinite ways to harass people and maybe settle scores. This is not to endorse unrestricted vilification of public figures on the internet, but things posted with no malafide intentions and with the purpose of raising a few laughs, should be taken in that spirit. A young India is hooked on to Facebook, WhatApp and twitter. A lot of one-liners, cartoons and videos make the round. They are designed to amuse you by lampooning public figures. They are not menacing in any way and will seldom promote ill will between communities or threaten the sovereignty of India. Punish the genuine inflammatory pamphleteer by all means using existing laws, but spare those whose intentions are not unholy. With Narendra Modi talking about transparency and good governance, it is time that vague laws and discretionary powers of the law enforcing agencies are withdrawn forthwith. Sec 66A of the IT Act is a prime candidate in this list.