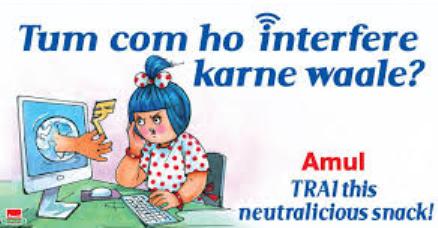 Editor-in-Chief of indiacommentary.com. Current Affairs analyst and political commentator. Writes for a number of publications. View all posts by this Author
TRAI bats for net neutrality
It is good that TRAI has batted for net neutrality and disallowed discriminatory pricing that would have, in the guise of providing free net connectivity to people, severely limited their choices, obscured their net experience, given birth to unfair cartels and disadvantaged small companies and startups.

Compartmentalizing the net will be a sin
The Internet is a vast, open network that allows almost everyone to get onto it â either to have their say or to be informed. The costs are not prohibitive, as long as one keeps things simple. Compared to the costs, the reach is vast and theoretically infinite. To cage or compartmentalize it would be a sin of the greatest order.

Investing in infrastructure and lowering spectrum prices are the answers
The problem of connectivity in India is due to lack of infrastructure and prohibitive pricing of spectrum. With the country emerging as a huge market for smart phones, those who actually need or use internet can easily access it at less than Rs 100 per month for 1 GB of 2G data and Rs 200 per month for 3G data. If telcos were not burdened with high base price of scarce spectrum, these prices could have been halved. The need is to invest in infrastructure to create seamless connectivity across the country.

Power to the netizens
The best part of this campaign for net neutrality was that despite Facebook flooding the country and social media with paid ads for FreeBasics, in the end it was the collective voice of the faceless, individual users that prevailed. This power will not be available to netizens if companies are allowed to carve out small fiefdoms of their own in the internet space. TRAIâs order is so comprehensive and so punitive for offenders that it has the potential of becoming the benchmark for regulators across the world. Hence it is a victory for netizens across the world.