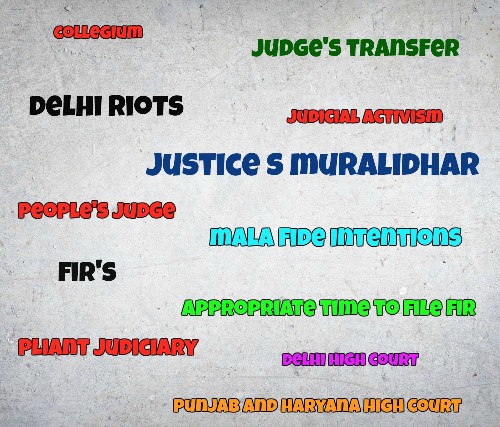 Justice S Muralidhar of the Delhi High Court has been transferred to the Punjab & Haryana High Court. This would have been a small news item in the inside pages of most Delhi-based newspapers. Some would have ignored it altogether. Instead, it has become a front-page item in all dailies and has sparked off a debate over the propriety of the Centre transferring a judge who was not 'pliant' and who had the 'temerity' to take the 'side' of the citizens in cases involving the executive. The government, on its part, has termed the transfer "routine". It has said that the transfer was recommended by the collegium headed by the CJI on February 13. Judges in India are routinely transferred as per the recommendation of the collegium. The government also said that the consent of the concerned judge was taken in advance, as per the rules.

But the timing of the transfer has become the bone of contention between the government and the critics. Justice Muralidhar was part of the bench that had held a midnight hearing over the Delhi riots and had torn into Delhi Police for their inaction. He had also directed them to file immediate FIRs against those who had made hate speeches (read Kapil Mishra of the BJP). The next morning he was transferred.  Critics are now questioning the timing of the transfer while alleging that the government had eased the judge out so he could not hear the politically sensitive case. But since all formalities, including taking the judge's consent, were done earlier, is it not possible it was just a coincidence that the transfer order was handed over to Justice Muralidhar the day after he held the midnight hearing? Critics allege that the judge should not have been transferred as he was part of a bench that was hearing the riot cases. But when should a transfer take place then? When a judge has no work at hand? Is it possible?

The issue is being given prominence as Justice Muralidhar is a "people's" judge and has a 'habit' of getting in the hair of the executive. Although he has delivered many judgments upholding the rights of the people, he was recently in the limelight for revoking the transit remand of activist Gautam Navlakha, an accused in the Bhima Koregaon case. But why should people accuse the BJP government of being against the judge? In his long and illustrious career, Justice Muralidhar had upheld the rights of the Bhopal gas victims, the rights of those displaced by the Sardar Sarovar dam over the Narmada river and was instrumental in convicting Sajjan Kumar for his role in the anti-Sikh riots in Delhi, apart from being part of the bench of the Delhi HC that decriminalized homosexuality. Judges like Justice Muralidhar are not bound by political ideology. His judgments have pinched the government of the day, whether it was the Congress or the BJP, as they did not let the executive ride roughshod over the rights of the citizens.

Transfers of judges are not done at the whim of the executive and the judiciary has a hand in the same. There is also a due process that has to be followed. Hence, it is not right to accuse the government of mala fide intentions in transferring Justice Muralidhar. Critics will also point out that after the judge was transferred, the new bench that was constituted to hear the Delhi riots case immediately accepted all the pleas of the Delhi Police and agreed that the situation was not conducive to the filing of FIRs on hate speeches. They will cite this as an example of the government trying to put in place a pliant judiciary that would do its bidding. The bench headed by Justice Muralidhar had earlier rebuked the Delhi Police for not lodging FIRs by asking "What 's the appropriate time? When the city has burnt down?" But the judges did not for a moment consider the fact that at that moment, it could have been entirely possible that the city could have indeed burnt down if the FIRs were lodged.

Lest we forget, the Supreme Court has twice deferred the hearings for the case questioning the constitutional validity of the CAA on the grounds that the situation was not conducive to hearing the matter due to the ongoing protests against the said Act. There is a time and place for everything. If immediate lodging of FIRs against hate speeches has the effect of adding fuel to the riot fire, is it not the duty of the court to let the police first make inquiries and then do the needful after the situation had been brought under control? There is no way the guilty should be allowed to escape punishment but there is also no emergency to rush into a situation where lodging FIRs against this or that person would mean that the riots, hitherto restricted to the north-eastern part of the capital, spread to other areas and possibly across the country.