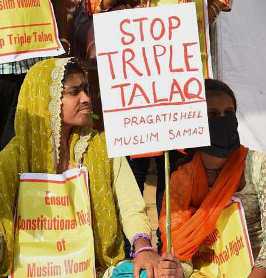 Editor-in-Chief of indiacommentary.com. Current Affairs analyst and political commentator. Writes for a number of publications. View all posts by this Author
The Supreme Court has finally examined the validity of triple talaq and by a 3-2 verdict of a 5-judge constitutional bench come to the conclusion that it neither meets constitutional stipulations nor does it pass scrutiny under the tenets of Islamic religion. Hence it has declared such talaq to be illegal.

Delivering the judgment, the lordships wondered (what all right thinking Indians have been wondering for long) why couldnt India stamp out an illegal Islamic practice when the same was stamped out long ago in Muslim countries including Pakistan.

The answer to this lies in two things. One, being a patriarchal society  even more so in the Muslim community  in India, anything that reduces the power of males or seeks to empower females is strongly resisted by the so-called pillars of society. That in case of triple talaq the pillars of society included Muslim scholars and bodies representing the community (all male dominated) skewered matters further. Illegal practices like divorcing on Skype, Whatsapp and through written triple talaq continued with gay abandon.

Two, Muslims pillars of society decided to take the brouhaha over triple talaq as an affront to their freedom of religion as guaranteed by the constitution instead of looking at it from the view of its legality vis-à-vis the tenets of Islam or why it was banned in other Muslim countries. In doing so, they sought to project Indian Muslims as more Muslim than the people of the community in places where triple talaq is banned. In doing so, Indian Muslim scholars sought to project themselves as more knowledgeable than their counterparts in such countries. But in reality, it was a game of power. Muslim scholars and bodies seeking to represent the community have always raised the bogey of affront to religion whenever there has been a demand to do away with something that is not mandated by Islamic personal laws but has been adopted in India through continuous practice. This stand has been taken by them despite the fact that the Supreme Court has time and again said that whenever religious laws are in conflict with the constitution, the latter will always prevail. In fact, the Muslim bodies have always said that the courts of law in India do not have jurisdiction over Islamic personal law.

The Supreme Court has once again refused to be cowed down by such threatening pronouncements of these bodies, especially All India Muslim Personal Law Board (AIMPLB). It has rightly refused to allow the continuance of something that is not clearly sanctioned by Islamic law. It has allowed women to have the right to be divorced with dignity and not summarily, even surreptitiously. It has restored to them the rights Muslim women have in countries where the state religion is Islam. This judgment shows that even if India is not yet ready to adopt a Uniform Civil Code, the time has come to codify personal laws of all religions and bring them under the purview of the Indian judicial system instead of allowing a parallel religious judiciary to function in a secular, democratic country.