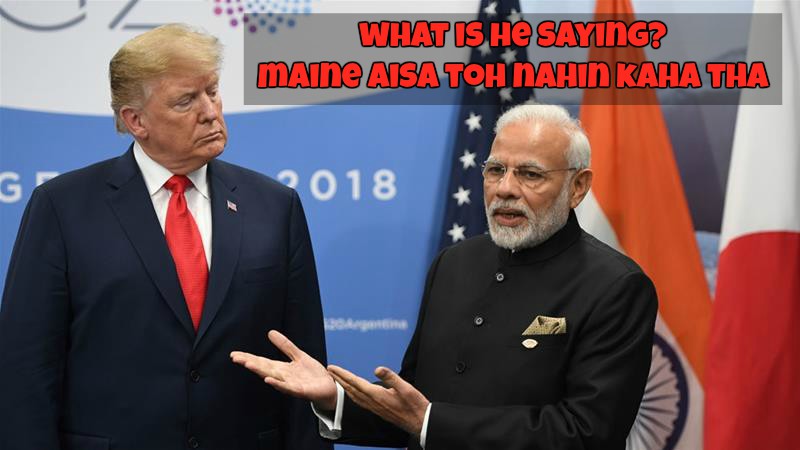 US President Donald Trump is given to making irreverent remarks. It is either due to his lack of understanding of some subjects or disdain for them. That is why he is sometimes not taken seriously. His gaffes draw hilarious responses on social media. Trump has now said that Prime Minister Modi had asked him to mediate in the Kashmir issue. The statement has been strongly denied by the Ministry of External Affairs. S Jaishankar, the minister of external affairs, told Parliament that there was no question of deviating from India's policy of solving all problems with Pakistan through bilateral discussions. Following this, the US State Department has issued a statement which recognized Kashmir as a bilateral issue between India and Pakistan which the US was ready to assist in resolving.

It is an unwritten convention that when the leader of one country meets with the leader of another country, he or she is not expected to disclose, neither publicly nor even privately, his or her confabulations with the leader of another country. That is privileged information and should never be disclosed. Hence, even if it were true, Trump is guilty of breaking this diplomatic convention. After this, most world leaders will be wary of discussing anything with him anything on the sidelines, even in jest. Trump should have recognized that India and Pakistan have signed the Shimla Agreement in 1972 and the Lahore Declaration in 1999 and both these treaties seek to resolve issues bilaterally. While Pakistan still tries to involve other nations in disputes, India has never done this. Hence, Trump was giving an upper hand to Pakistan by claiming Modi asked him to mediate between the two nations. Maybe he was trying to soften Imran Khan before seeking his help in getting out of Afghanistan and holding talks with the Taliban.

The US has been trying to take credit for many things between India and Pakistan that were resolved recently. It had claimed that Wing Commander Abhinandan was released from captivity after it mediated with Pakistan. Recently, when terrorist and Mumbai terror attack mastermind Hafeez Saeed was arrested by the Pakistani authorities, Trump had claimed that US pressure was instrumental in Pakistan 'finding' the LeT chief. But was Saeed ever in hiding? He was seen making inciting speeches against India all over Pakistan. There is no doubt that the US has been putting extreme pressure on Pakistan to neutralize all terror groups functioning out of that country. But so are most other nations, including UK, France and Russia. It was international pressure and not only US pressure that forced Pakistan to follow diplomatic norms and release Abhinandan and it was international pressure again that is forcing Pakistan to act against terror groups, although not very convincingly. Hence, the US and its President must refrain from making unverified claims.