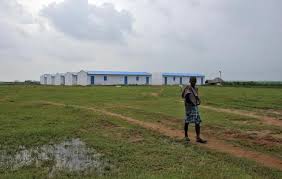 Editor-in-Chief of indiacommentary.com. Current Affairs analyst and political commentator. Writes for a number of publications. View all posts by this Author
Since the NDA government has not diluted the provisions of the ordinance on land and has presented the bill in toto, it can expect to encounter stiff resistance to it in Parliament. Already, its own ally, the Shiv Sena, has made its displeasure known by not attending the NDA meeting called to finalize the strategy in respect of the bill. The Opposition, emboldened by the Delhi results and the BJP fiasco in Bihar, walked out of House when the Bill was tabled.

The main opposition to the Bill is because it ostensibly gives a raw deal to the farmers, whose land is sought to be Ã¢â¬ËgrabbedÃ¢â¬â ¢ for corporate interests. The Congress will have nothing less than the original Bill that it had drafted to be passed into law. The Left and the Janata parivar are saying that the NDA has sold itself to the business class. Anna Hazare is saying the same thing. The opposition parties can be expected to turn this into a farmerÃ¢â¬â ¢s movement by hitting the streets.

But is the opposition to the Bill justified? One feels that it is not. The UPA bill was aimed as a populist measure. It was grandstanding on a huge scale by telling the farmers that it would not allow industry to take away their land by promising many times more than the market land, obtaining their consent and making other provisions so tough that it was almost impossible to acquire large parcels of land for big industrial or infrastructure projects.

That is not the best way to take India forward. Interests of the farmers have to be protected but there has to be a balance between that and rapid development of the country. It is only through big industrial and infrastructure projects that jobs will be created. For that, land needs to be acquired. If the opposition does not understand this simple theory, they will hamper the countryÃ¢â¬â ¢s development.

The government has the option of bulldozing the Bill through the Lok Sabha as it has a comfortable majority. It can also call a joint sitting of the houses to do the rest. But will that be a democratic exercise? If there are too many reservations against the Bill, the best way would be to rethink some of the disputed provisions, without diluting its main stand Ã¢â¬" that of making land available for defence, affordable housing, rural infrastructure, industrial corridors, public-private projects on a priority basis.