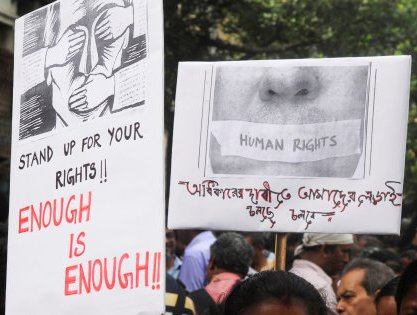 Editor-in-Chief of indiacommentary.com. Current Affairs analyst and political commentator. Writes for a number of publications. View all posts by this Author
India, along with several other countries, is in the line of fire in a report by the United Nations for either state persecution of rights activists or allowing the same by non-state actors. This is not a surprise as the current situation in the country is such that the government and the cohorts of the major party in the ruling coalition have started a sustained campaign against NGOs, Dalits and minorities. Be it urban naxalites or beef eaters, burqa wearers or church-goers or even students supporting various causes, everyone is being targeted for having eating habits, dress code or views that are not in sync with those of the ruling party and its cohorts.

The recent arrest of five respected citizens on charges of being urban Maoists just for helping the marginalized people was the last straw. Even the Supreme Court denied them judicial or police custody, asking them to be kept under house arrest instead. There are many areas where the government either neglects the people or uses repressive laws to curtail their rights. The work of activists and NGOs in these areas is required and commendable as it prevents these people from being swamped by the government machinery which is often used by vested interests. Hence, the government action against rights activists is reprehensible.

The UN has done well to highlight the repression in its report. This government has a very low threshold when it come to tolerating dissent and an alternate point of view. This is not to say that all activists and NGOs are unbiased and are only working for the people. Some of them do have a political agenda, guided by Leftist ideology, and they are going after this right-wing government on each and every issue. But repression is not the way to deal with them. Unless they break laws, the government must counter their propaganda with correct information and programmes to uplift the marginalized people. That is the best way to counter dissent in a democracy.