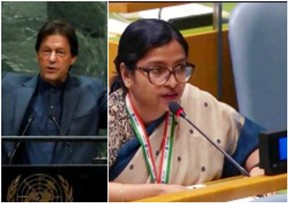 India has responded strongly and rebutted everything Pakistan's Prime Minister Imran Khan said in his speech at the UNGA regarding India and Kashmir. Using its right to reply, India exposed Pakistan as the epicenter of terror and said that it had no right to interfere in India's internal matter.

Earlier, continuing his recent theme of painting India as an occupying force in Kashmir and saying that India would commit genocide on the Kashmiri people leading to a war between the two countries that could have "consequences" as both nations have nuclear weapons, in his 50-minute rant at the UNGA, Imran Khan once again threatened the world with a war that could see the use of nuclear weapons if India did not rescind its action of abrogating Article 370.

But India has reminded Khan that "pogroms are not a phenomenon of today's vibrant democracies". The first secretary in India's Permanent Mission at the UN, Vidisha Maitra, said that "words matter in diplomacy. Invocation of phrases such as "pogrom", "bloodbath", "racial superiority", "pick up the gun" and "fight to the end" reflect a medieval mindset and not a 21st-century vision. Terming Khan's speech as a "hate speech", India said that it was a "callous portrayal" of the world in binary terms like "us vs them" and "Muslims vs others" that fosters divisiveness.

India also reminded Khan of the genocide Pakistan had perpetrated on its own people in erstwhile East Pakistan (now Bangladesh) and posed several questions to Pakistan regarding providing safe refuge to more than 130 UN-designated terrorists and 25 such entities and funding terror organizations for which its largest bank, the Habib Bank, had to close down its operations in New York. It also reminded the country about its impending blacklisting by the FATF over terror financing.

It was a great reply from India that exposed Pakistan point by point. With no country or organization in the world, except China and the Organization of Islamic Countries (OIC), coming around to the Pakistani view on Kashmir, Khan has been busy trying to scare the world about a possible nuclear war with India that could be "catastrophic". But India has shown in its reply that Pakistan's "threat of unleashing nuclear devastation qualifies as brinkmanship, not statesmanship".