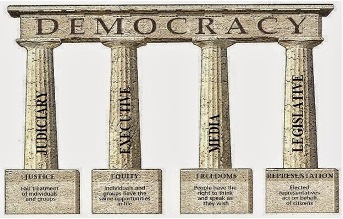 Unnecessary Squabbling Between Pillars of Democracy

Unnecessary Squabbling Between Pillars of Democracy

Editor-in-Chief of indiacommentary.com. Current Affairs analyst and political commentator. Writes for a number of publications. View all posts by this Author
Debate is the backbone of democracy and when there is debate then there will be difference of opinion. The consensus emerging from taking into account various threads of thought is what makes for a robust society. But there is a time and place for airing ones opinions. The way two pillars of democracy  the executive and the judiciary - faced-off during the National Law Day celebrations in New Delhi was embarrassing, to say the least. The judicial fraternity was out there in force and we had the Union law minister openly accusing the judiciary of meddling in what he thought was the exclusive domain of the legislature and the executive.

The government is piqued that the judiciary entertains too many PILs and pronounces judgments which nullify legislation. It accuses the judiciary of overreach. But arent PILs borne out of the governments inability to enforce and apply the given laws efficiently? The legislature makes laws which the executive is expected to apply and enforce. If citizens are aggrieved, they approach the judiciary for redress. In normal circumstances, a citizen has to be directly affected by a law to file a case in court. But what happens when a law is not applied or applied incorrectly and it adversely affects a large number of citizens? It is then that activist lawyers and civil society activists petition the court to change the situation through a correct interpretation of law.

Since the judiciary is there to interpret the laws, it cannot out rightly reject PILs. There is a mechanism to filter out frivolous PILs. Still, most of the PILs that do get admitted are not to the liking of the government in power as most often they are against its shortcomings or unnecessary interference in the lives of citizens. This is not to say that there is no judicial overreach. The ways of the judiciary are strange  banning liquor vends, making singing of national anthem in cinema halls to cite a few examples  and very often such decisions are seen as making laws instead of interpreting them.

All three pillars of democracy need to develop a healthy respect for each other. The government has to apply and enforce laws equitably. It has to maintain law and order. Additionally, it has to redress the grievances of citizens as and when they surface with patience and compassion. Highhandedness often results in alienating the citizens and then filing of PILs. The courts would be amiss in their duty if they do not entertain PILs aimed at redressing the grievances of citizens. The legislature, on its part, needs to review old laws and rectify their lacunae and draft new laws after taking into consideration the concerns of citizens. If all wings do their work with diligence and with a respect for the work of other wings then there will be lesser problems of encroaching on each others turf.